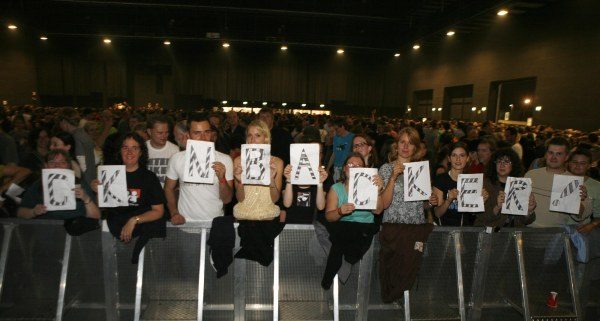 It has been an eventful week, with the rounding up of Peter’s guitar consuming many of us–when a commuter plane carrying Dewitt and the Beloved Rickenbacker, showed up early yesterday morning here in Luxembourg, the task was complete and we were ready for what promised to be a great show It was. Luxembourg, and specifically the Rockhal (place for rock concerts!) ROCKED! While of course Peter had adapted to his backup plans for axedom during the last five shows, even as an untrained ear, one can’t help but notice that the tones and overall sounds of that guitar are just . . . different, at least in Peter’s hands. From the first notes of “Living Well” through the final strains of “Man on the Moon,” the show rocked and swayed and shook and roilled through an evolving setlist. Some old favorites like “Rockville” and “Seven Chinese Brothers,” recently re-discovered (again) “I Took Your Name,” and a stunning reading of one of the first songs the guys wrote in 1979 or 1980, “Just a Touch,” which Michael introduces as a true story about his second job, at a Shoney’s . . . all the way through the encore and the big surprise of the night. . . . . “Sing for the Submarine.” Whoa! Quite a Return of the Rickenbacker indeed!

If Luxembourg’s marketing slogan isn’t “Europe’s Unexpected Surprise,” it should be. We had a fun walkaround there and it is exactly like its geography would predict– a little Germany, a lot of French and some Belgian– who knew it has it’s own language, Lexembourgish, spoken by about a half a million people in the world (pretty much 14th century German), and that it pushed for the start of the Benelux trading community, which led to the Common Market (European Community and eventually the European Union and today’s EURO. . .?)– I didn’t but I do now. Fascinating place, fun town for R.E.M.. . . must now head on to Geneva, which I won’t mind at all, as it is one of my favorite spots in the world. Only two weeks to go on this tour. Right now the last announced date is Istanbul on Saturday October 4th, but watch this space in the new week for some exciting news about further adventurousness.

Upcoming moves for us include, after Geneva, a night off at Octoberfest in Munich, shows in Munich and Zurich, then into Bologna and Torino all in the next week– and of course we are as glued to the Herald Tribune, Talking Points Memo, CNN, the Huffington Post and Pbd.blogspot.com as if we were home . . . how’s that VP pick working out these interesting days for everybody!? Yikes!

p.s. As the band took the stage a group of enterprising fans, from Wales, Germany and Denmark, at least, were ready with their homemade individually-lettered sign that read simply:

Check out the 9th photo below. R.E.M. has the best and most creative fans anywhere they play– we are blessed.

R.E.M. HQ · 22 hours ago
@remhq
Thrilled to see continuing progress in the movement to finally get recording artists paid when music is played on the radio https://t.co/1IL6Fw87vz #MusicFairness
View on Twitter
11
46