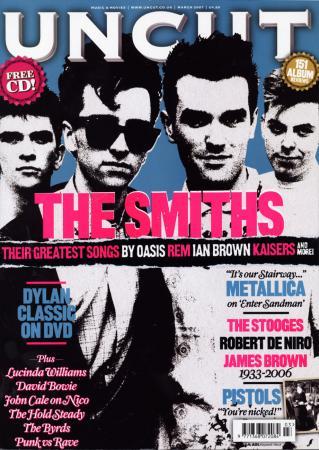 Peter was asked by UK music mag Uncut to participate in their poll of the 30 greatest songs by legendary Manchester group The Smiths, who, after an illustrious but short career, disbanded in 1987. The results of the poll are published in Uncut’s March 2007 issue, and the song Peter selected, “How Soon Is Now?,” called by The Smiths guitarist Johnny Marr “our most enduring record,” has been rated as the greatest of the Smiths greats.

Here are Peter’s thoughts on the Smith’s classic, first released in August 1984 on the 12″ for “William It Was Really Nothing”:

The lyrics are great, but for me, I approach it as a musical thing. If nothing else, all the guitar tones are just so wonderful. There’s the tremolo and then the slide has this amazing texture. It’s a great ensemble piece, with the four musicians all playing together really well. It’s so evocative and so kind of eerie. “How Soon Is Now?” is very un-Smithslike. I bought it in America, where it was the B-side to a single, though I can’t remember which [Double A-side with “Shakespeare’s Sister”]. That was in the days when you’d buy the single just to hear the B-side, because they were so special. I heard Seymour Stein call it “the ‘Stairway to Heaven’ of the ’80s”, but I like it better than that. “Stairway…” was played on radio stations in Georgia 10 times a day, but “How Soon Is Now?” was greatly underplayed. I don’t think I ever heard it on the radio.
Johnny and I tend to share influences, which come out in a very melodic way. I met Johnny about a year ago, and we were hanging around together. And we started talking about The Smiths. I said, “Sure, I always loved The Smiths, but I can’t tell you how much I resented being compared to you all the time!” I’d come to England and everyone would say I’d obviously learned everything from Johnny Marr. And I’d point out that R.E.M. had two albums out before The Smiths had released their first one, so it would have been really hard for him to influence me. And then Johnny would say: “My God, you should have seen what it was like for me when I went to America! They’d say the same thing about you!”

You can read the remainder of this interview in this month’s Uncut.