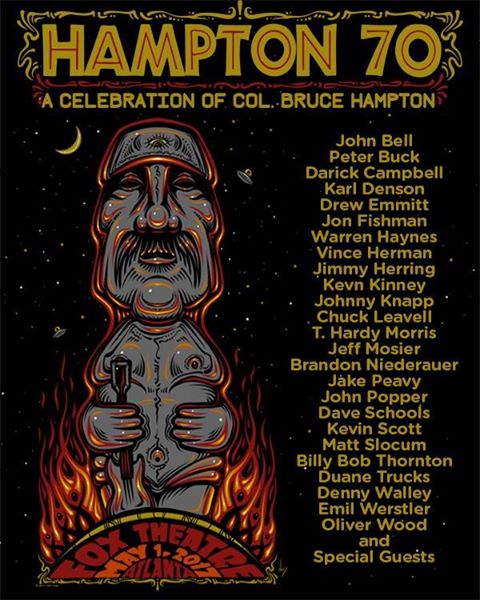 Peter Buck will be among the all-star cast of musicians performing at Hampton 70, a celebration of the music and influence of Col. Bruce Hampton on May 1, 2017, at the Fabulous Fox in Atlanta. Tickets go On-Sale March 17th at 10am http://foxth.co/hampton70-atl

Peter had the following to say about Col. Bruce: “I started seeing colonel Bruce and the Hampton grease band in 1971.I was one of those irritating kids that would skulk around and ask for guitar tips.Harold kelling was kind enough to show me a few things.the grease band and colonel Bruce were already legendary in a very underground type scene.they were incredibly out there musically,in a very organized way.they were the first advante garde type rock band I’d ever seen.I followed the colonel through his various musical and spoken word trips in the seventies and eighties,right up to the current day.you could always count on colonel Bruce’s band to be incredibly musical and intensely liberating.he kind of functioned as a finishing school-life coach to several generations of southern musicians.I’m completely honored to be involved in the tribute concert at the Fox.I just hope I don’t mess up!” ~ Peter