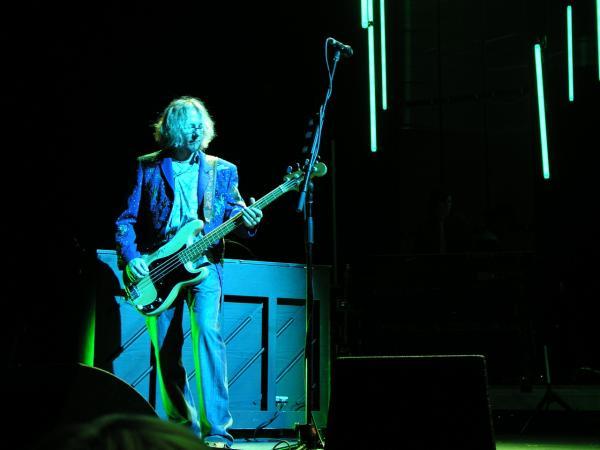 REM “still much in love” after 25 years of “marriage”

REM, playing today at 21h45 in the Atlantic Pavillion, is formed by three north-american democrats that believe in the value of activism in this century. Bassist Mike Mills
believes that in 4 years the political pendulum in the States will change. He wants to be remembered as a person of good an not as a musician. And he loves doing nothing.

Q: Vote For Change concerts didn’t changed the american vote. How did you reacted?

MM: I don’t feel bad because i think we did everything we could do to achieve a change. We wanted to take more people to vote, and we managed it. The problem is that the republicans also took a lot of people to vote. And their fear tactics have proven to be more efficient that our tactics…. of hope.

Q: And the next four years?

MM: Fear! That was what the Bush campaign brought us, they scared people to get votes, and he will continue to make an ugly place out of this world. More four years scaring people! He certainly scared me!

Q: Did you feel that newer generations have an opposed vision of the republicans, like you and Springsteen?

MM: I think that the majority of youngsters still believe in hope and wants to do a better world. And that why they voted for John Kerry. The majority of voters between 18 and 24 voted for Kerry. But it’s like this, the change of the times. In the 60’s there was radicalism, in the 70’s and 80’s not quite so, the activism returned in part in the 90’s, and in the 2K’s being active is even more important. But not always successful…

Q: Are you giving up on America?

MM: No! I believe that everything changes, and just because they won this time, doesn’t mean they will win next time! The pendulum comes and goes, and if in this moment it’s on the right side, soon it will return to the left.

Q: Tell me about this tour.

MM: Everything’s new. Everytime we start a tour everything is new, as if we would reborn again. A beautiful stage and lights, many songs from “Around the Sun”, and everynight there is a different lineup. We’ll always play LMR or MOTM every night, but many will be different. We rehearsed plenty of songs.

Q: Don’t you get crushed by having to choose them from your huge catalog of songs?

MM: No, exactly because we have so many to choose from, some of them we don’t play for a while, so it is an excitment and they sound fresh. The more songs you can choose from, the more you can enjoy it.

Q: REM were a “sun” in which worlds of music turned around. Are you now just a “satellite”?

MM: Every band has what we call a career bow – if they get lucky…
It starts with a growing period, after a really popular period, then it falls down, and if you’re really really lucky, you can get success again. We don’t care about this. We play our songs, do our records, have fun. Sometimes it matches with world tastes, sometimes it doesn’t. When we started with our music, we weren’t mainstream, in the 90’s it fitted the mainstream, and now in the 2K’s it came out again, in part. And we are comfortable with that. We didn’t start a band to get famous, but to spend some good moments, and hell, did we have some good moments!

Q: After 25 years of marriage!

MM: Yes, we are still much in love by each other!

Q: Do you still care with a new record reactions?

MM: When we kill ourselves working on a record, we like to people to appreciate it. But we also do the music for us, because if we started wondering with what other people think, we would get nuts. We just have to make sure that we (Peter, Michael and me) are happy with what we’ve done. The rest we can’t control.

Q: Are you art confronted to entertainment?

MM: We want to entertain, but we can’t say “let’s please this or that group of people’. If we resist that, than we maintain our art.

Q: You’ve been an REM all your life. How are you gonna be understood after that life?

MM: I think i am the luckiest person in the whole world, and i’ve got the best job in the whole world, and i try to be the best possible person. But what i do isn’t what i am. The person i am, the one who takes good care of family, friends, is concerned about the world and tries to leave it better than when i found it, is separated of the person i am as musician. And, when i die, i won’t be defined for doing great records, but for having been a good human being.

Q: After this year of constant touring…

MM:… i’m going to rest. Do absolutely nothing.

Q: There are people who have an extreme difficulty in doing nothing.

MM: But i am extremely good at doing nothing!

Thanks very much to murmurs (dot) com for the mirror rights and Rauljsb for translating this interview from http://ultimahora.publico.pt/showne…2491&idCanal=52: