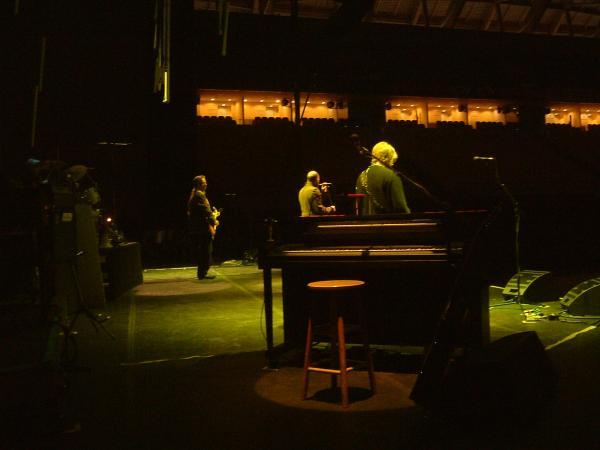 A healthy sense of anticipation underlies the mood here in Lisbon as we prepare to embark on an ambitious schedule that will take us as far north as St. Petersburg and wind up with 2 nights in Dublin 37 shows from now (all by the end of next month!). It is a great city to begin a tour inâ from itâs geographical positioning, you kind of either need to start or end here, and the rehearsal period has been a nice few days with some time for re-acquainting ourselves with the old and new-world charms of this mysterious, shimmering, ancient, lively metropolis. Lisbon is unlike any other city I have ever been to, with some of the best-preserved traditional architecture anywhere but with a bustling, inspired modernism throughout as well; I have been in a couple of local eateries lately where we were the only Americans and there were no English menus– a lot of fun and delicious, and awesome seafood.

The show is ready to pick up where we last left off in the States and Mexico, and the band might have a few surprises to unveil in the way of ânewâ âoldâ songs, at least from what we are hearing in the rehearsalsâthey like keeping it interesting for everyone including themselves, and the stage has a few new bells and whistles to be seen by the people in Lisbon, Madrid and Barcelona this weekend and across Europe the rest of the way; photographs will follow in this space soon after tonightâs showâall I will say for now is it will be quite a scene…

Anyway, the break was nice but it is a touring year, so here we are all ready to goâ¦see you along the way.

p.s. A couple of record notes:

– If you havenât visited iTunes lately, there is an âiTunes Originalsâ up featuring music, live tracks and interviews with R.E.M. quite well-received and definitely worth checking outâone of the kinds of things the âlegitimateâ music services are uniquely suited forâ¦
– âAftermathâ is now at radio in much of the worldâ the second single from Around the Sunâ¦