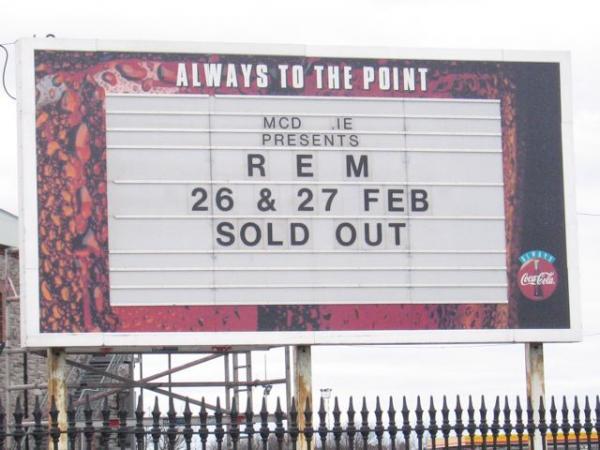 We are in the Departure Lounge of Dublinâs airport, getting ready for a lot of flying (to Cape Town), then a few days before our first-ever show in South Africa (Friday night in Cape Town).

What a great weekendâit was Ireland after all. Belfast was the realization of a long-time desire to play that city, and the band and crowd certainly acted like it, with one of the most rocking sets that I can remember in Europe: loud, boisterous, energetic audience, intimate cool building (The Odyssey near the water)–very memorable. And then on to Dublin, for the only two-night stand of this part of the tour; as usual, great crowds both nights and lots of old friends in the crowd. Pals from the states, The Thrills, Pat McCarthy with a lot of other MacCarthys, lots of the Principal Management folks (they seem to have been busy of late…), various other luminaries from Dublin and abroadâ¦as always, everybody wants to be in Dublin and for good reason: somehow the combination of the city, the buildings, the squares, the people, the vitality, the food…all adds up to a life and a vitality youâd be hard-pressed to match anywhere else, and the Point Depot has been transformed into a pretty amazing venue for concerts–has the feel of the largest club in the world, like the old Electric Ballroom in Atlanta or the Ritz in NYC or the Fillmore in Denver, except it is the size of a substantial arena. Both nights were fantastic showsâwould be tough to pick one better than the other. A cool thing during Sundayâs show: Michael went out to play the first encore song (Kenneth) in an Ireland rugby jersey …borrowed from a fan in the audience …commemorating Irelandâs historic win over England that afternoon at Lansdowne Road; needless to say, the place went up for grabs and was as loud as I have ever heard a crowd anywhere–it was a very cool punctuation to the second show here in the Point Depot and the final night of our 7 week stint in Europe … a set that included Cuyahoga, the Ascent of Man, and in the encore The Worst Joke Ever and Rockville. As they say here in Ireland … ânot bad!â

Got to run and not miss the plane.