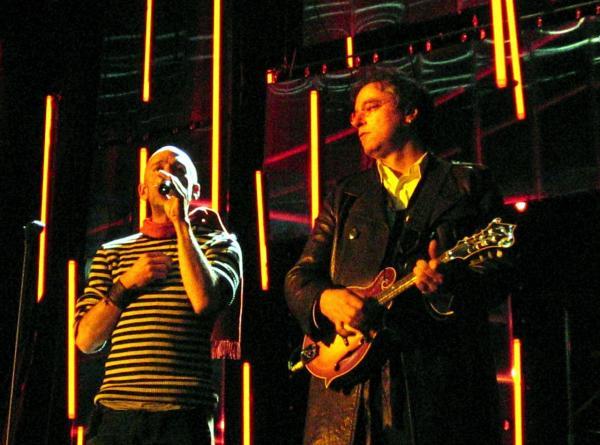 Although R.E.M has played the Republic of Ireland many times in previous years–the first being in 1984 at SFX and the last being at Marlay Park in 2003–the guys have never journeyed up North until now. So, it is with great anticipation and a sense of “we finally made it” that the band takes to the stage tonight at The Odyssey in Belfast, Northern Ireland. Support will come, once again, from Athens, GA band, Now It’s Overhead, fronted by whiz-kid/mastermind Andy Lemaster, who many of you will remember from the REMIX project a couple of years ago.

For an interesting read on Belfast and its newfound ability to attract major acts, please visit the Belfast Telegraph.

After Belfast on Friday, R.E.M. will drive south for two shows at the Point in Dublin–the first & only two-night stand in any one city in Europe on the tour. Dublin is always a favorite stop for the band; the guys have many fond memories of their time in Dalkey during the recording sessions for REVEAL; plus, the concerts in Ireland always fall somewhere at or near the top of our year-end favorites’ list. It’s also the home of Patrick McCarthy, who has produced R.E.M.’s last three records: Up, Reveal, and Around the Sun. According to our records, this is one of the first indoor shows the band has done in Dublin in quite some time. The bottom line on Dublin: another one of those “home-away-from-home” places much like Vancouver…

GLASGOW RE-SCHEDULE IN THE WORKS
As of Friday afternoon we are working determinedly to reschedule the Glasgow show for the month of June; we hope to have an announcement by next week, so please stay tuned if you had tickets to the show at the SECC which was cancelled due to Mike’s illness.

ELECTRON BLUE SINGLE OUT MONDAY
As reported here on February 1, Monday is release date for Electron Blue, the third single from Around the Sun. There also will be a limited issue blue vinyl 45 b/w a live version of “What’s The Frequency, Kenneth?”. Here are full details for the CD Maxi Single (International):

RE-ISSUE COMPETITION AT REMUK.NET
Visit remuk.net for your chance to win tickets to the UK Summer show of your choice and to view exclusive footage of the R.E.M. re-issues.