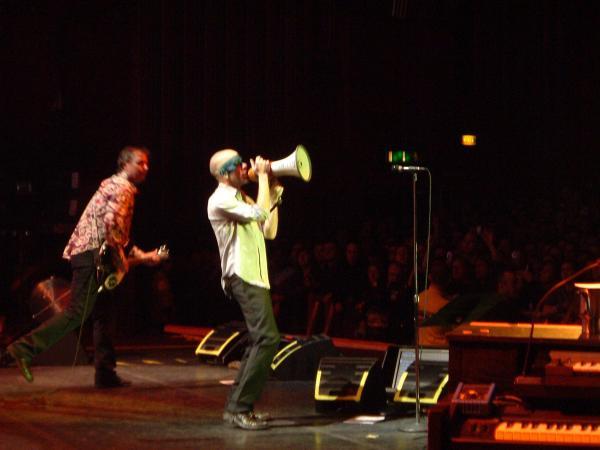 London was tremendous in every way–show, aftershow, friends, families, city, press–all fun, all greatâ¦even some sunshine and a day (yesterday) to rest up for the stretch run here in England, Scotland, Northern Ireland, and Ireland. The show at the Apollo was our second in 6 months after an 18 year absence (we had last played what was then the Hammersmith Odeon in 1986, and last year R.E.M. appeared with several bands including Razorlight, Jamelia, The Thrills and the Zutons at a benefit for Oxfam). It is a venerable old room and building, with a club-like feel on the GA floor and a theatre-like feel in the spacious balcony; a very loud and live feel and the band responded with a loud and live set, from now common opener âI Took Your Nameâ through romps of âDeparture,â âBad Day,â and âOrange Crushâ and a beautiful rendering of the epic âSwan Swan hâ in the encore. And as usual, it was fun to have old and new London friends around for the fun, plus a few imports attracted by the fabled metropolis.

It seems the show was well received by all present; Click these links for reviews:

âElectron Blueâ is getting played a lot on some of the better UK radio stations and the live video, directed by the tourâs own Blue Leach, is on a few video outlets. The single comes out next week, in all sorts of formats, including an electron blue plastic vinyl 45â. And a couple of extra live tracks, including a video from a show of âLeaving New Yorkâ…

After a fast and comfortable train ride today from London, we are now in lovely Sheffield and back in a proper arena setting. On to Scotland tonight and the Emerald Isle this weekend before the long flight(s) coming up to the far-flung parts of the tour.