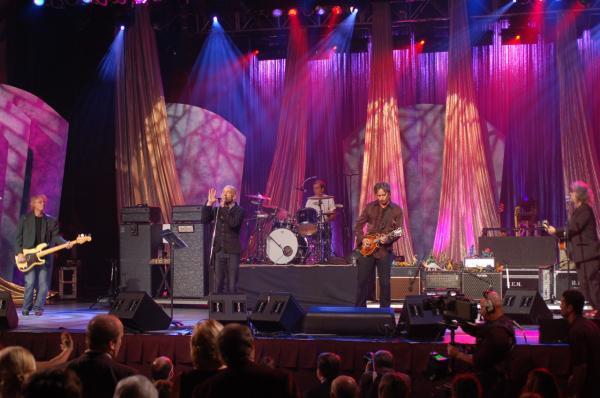 Well, we have had a few days to reflect on the proceedings over in Atlanta, with the band being inducted into the Georgia Music Hall of Fame. It was a fun fun evening, with the band playing and speaking great (way to go guys!), a swell time enjoyed by all our friends and fans and families, and a lot of herculean work pulled off by our staff, both Athens-based and the A-team touring crew we assembled for the occasion. We were honored by Max Clelandâs introduction of the band, Max being a longtime friend and a true American hero throughout his life of public service and Michael made a wonderfully-received acceptance speech on behalf of the band. But of course, to many of us in the hall, the musical highlight was R.E.M.âs performance, drawing people from near and far, old and new, all keyed on seeing the original lineup of Berry, Buck, Mills and Stipe. Roaring into Begin the Begin, Losing My Religion and Man on the Moon, they have never sounded more alive and for that matter LOUD! ALL three songs sparkled and cracked and the room came alive with a mostly standing audience (certainly all our tables were and we had alot of tables spread throughout the room).

All in all, it was about as much fun as you could ever have in a 2,000 person ballroom of a massive convention center (boat show coming soon!). In fact, when many of the further-back tables came streaming down the center aisle when the band launched into Begin the Begin (including many fine and professional music executives!), it took me back to another cherished ATL moment when, in early December of 1980, this new young band called R.E.M. from Athens was invited to open at the Fabulous Fox Theatre in Atlanta for the hugely-successful Police. Well, during the openerâs set, a few songs in, all the sudden the orchestra pit floor was full of a throbbing mass of Athenians rocking out to R.E.M.âs early reportoire, just as they were used to doing at Tyroneâs, the 40 Watt and UGA back home. This caused quite a concern from the powers-that-be in Police and Fox quarters and by the time the headliners took the stage, the floor of the pit had been lowered to make sure such a kerfluffle would not happen again. And that the crowd would be a safe distance away from the musicians onstage… The other night, i am guessing that at least a few of the stage-rushers were among those crazy kid dancers all those years ago… the whole night had a real old home-week feel too in the best possible sense.

One other personal observation before I get back to work: it was really special for me to see the combo part of R.E.M. serving as Gregg Allmanâs backing band for the classic Allmans song Midnight Rider. Growing up my high school years in the outskirts of Atlanta, the Allman Bros Band were the first band I ever cared about, traveled for, played for the entire 2 hours of my college radio show (for my first 2 years of college!). So to hear that dark and mournful song, with Bill, Mike and Peter playing out of their normal sweet spot but doing a great job of it, with the still-in-fine-form unmistakable Gregg Allman voice . . . it was quite a transcendant experience for me. Midnight Rider is one of those timeless songs, with a lot of meaning and resonance added over the years, and the combination of R.E.M. and Allman had a special poignance with all those people from all our years together there to enjoy it. Perhaps unlikely in some ways, but hey, it worked out just fine and most people considered it one of the highlights of the night. I sure did.

Here are some good links for other reports on the show:

For anyone living in georgia, remember that the re-airing of the show is this coming Friday night on Georgia Public Broadcasting at 8:30 PM.

We continue to follow news about the release of And I Feel Fineâ¦The Best of the I.R.S. Years 1982-1987 and the reception it has had. Here is a nice review just posted this week:
review

Back to the âyear offâ ha!

P.S.: Pete McCommons, long-time conscience of Athens media, has an excellent piece in this week’s Flagpole on what it means to be a Progressiveâ¦something written for our town of Athens but worth pondering everywhere as November elections approach.