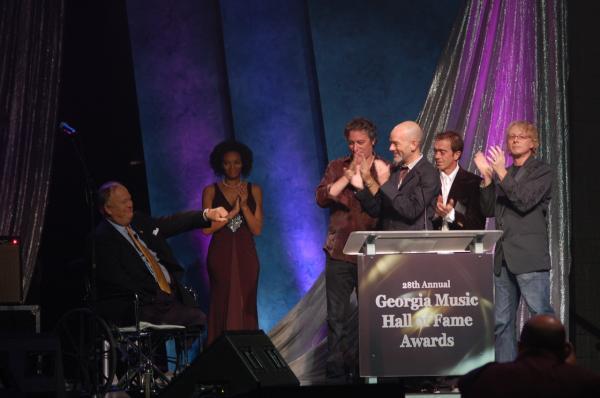 The band was inducted into the GA Music Hall of Fame by former Georgia Senator Max Cleland after a rousing three-song performance in front of a crowd of 2,000 strong at the World Congress Center in Atlanta. R.E.M. awoke a somewhat subdued crowd with an anthemic Begin the Begin followed by Losing My Religion and closer Man on the Moon, a song which Michael spoke of as being about passage and which he subsequently dedicated to Texas Governor Ann Richards who passed away earlier in the week. Berry, Buck, Mills and Stipe were in superb form on a night with many highlights including a show-closing surprise performance by Peter, Mike, Bill and Scott McCaughey as Gregg Allman’s backing band on Allman Brothers Band classic Midnight Rider.

After Senator Cleland’s introductory comments which were augmented by a video of highlights from the band’s career, Michael delivered an acceptance speech which was both moving and eloquent; he spoke of the band’s deep appreciation for the honor from the GA Music Hall of Fame and thanked the fans, the crew, the office, family members and friends who were assembled to support the band.