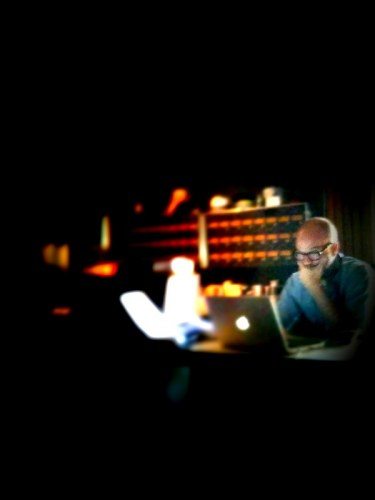 . . . . a city where we have always enjoyed whistle-stopping through, and now we’re here long enough to work on R.E.M.’s next record. Berlin is a pulsing, exciting city with so many varied and distinctive neighborhoods, iconic history all around, great food at all levels and from every corner of the world . . . an excellent place to set up camp and make a great record. Work continues apace with Jacknife Lee and his ace team of Sam Bell and Tom McFall, and while I will not report on the sound or the dimension of the recordings so far, to my ears it all sounds like quite a wonderful set of songs.

In other news, the band was certainly happy, and a little surprised, with the honor of Radio Free Europe being placed in the Library of Congress Recording Archive— it was sort of out of the blue and of course the single that got it all started for R.E.M. did seem to have a powerful influence on the musical course of the next period of time in American music. I must track down the original “cassette set” the band gave away for a while before the Hib-Tone 45″ came out officially– Radio Free Europe and Sitting Still, of course, with bonus track White Tornado and original Xeroxed artwork for a sleeve. I wonder if I still have mine.

And speaking of history, Fables of the Reconstruction was out almost exactly 25 years ago and the anniversary edition, including the long-forgotten Jim Hawkins Studio demos, will be issued by EMI in two weeks, on July 13th. Finally, Athens seems to be buzzing along in our absence with AthFest this past weekend and a ton of good shows coming through town from Mitch Easter to Cracker to Interpol . . . a new magazine of Southern culture has taken notice and a nice story on Athens and its allures was penned by our old friend Matt Hendrickson.

That’s all for now, and have a great summer wherever you are,