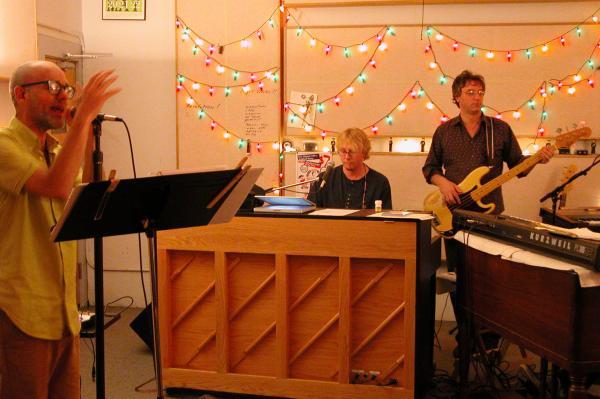 We are about finished with the work here and will be heading across the water to Miami for the final phase of recording and mixing. Compass Point has been a wonderful place to work, and the songs and sounds have really been flowing the past few weeks. I have lost count but suffice it to say there are many, many more songs needed for a CDâs worthâso the process of finishing and releasing this record should be fun indeed; still lots of work to be done. Some song titles I see bandied about: âOn the Fly,â âThe Outsiders,â âLeaving New York.â

We have been talking about touring plans and will be able to announce something fairly soon. As promised before, some new places and some familiar ones. It will be quite a year from the looks of it, and we canât wait.

Anyway, what more to report? The guys are all doing well. They are making a very cool record with a lot of things that sound nothing like them, plenty of things that do, and a strong sense of melody throughout (and no reggae or overtly island mon tings that i hear!). If you are already an R.E.M. fan, I cannot imagine you not liking this one; if you arenât a fan, maybe you will be when you hear it. We are aiming for a fall release with concert dates to follow soon thereafter.

In side news: Michaelâs movie Saved is due to premier in a couple of weeksâfor the movie he dueted with Mandy Moore on Beach Boys number âGod Only Knows;â Mike recently had the honor of awarding a lifetime achievement to Big Star in their hometown of Memphis; Peter is staying busy with Scott and their Minus 5 adventures (see related articles on main news page) and he just recently played on the upcoming Thrills record; their last one, So Much for the City, was a real gem. Speaking of the Minus 5, they will be doing a benefit to raise funds and awareness for an organization called No Vote Left Behind in Seattle in early May (see separate news article). In June, Scott will embark on a ten-day tour of Croatia, Slovenia, and Bosnia with the Bambi Molesters.

All are preparing for the stretch run in finishing this record that started in Vancouver, took a break for the hits package and tour, resumed here in the tropics and is headed for a record store near you in a few months…