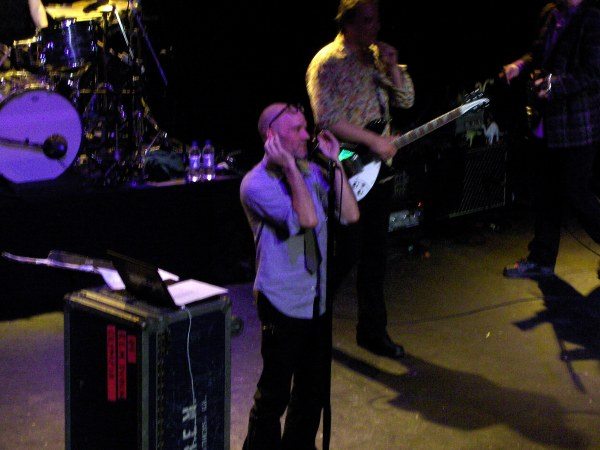 Well, what a week it has been: last Thursday the band was assembling for the rehearsals for the Rehearsals (which are NOT a show in case you hadnât heard); this Thursday, they are playing their final of five nights that have been beyond anyoneâs expectations.

The new songs have gone over very well, with repeat (or maybe itâs YouTube) patrons seeming to know the words to many of the fast ones (thatâs most of them). The chestnuts that have been offered as a peace offering have been thoughtfully and generously chosenâ sure, there are some sporadic standards that occasionally work their way into R.E.M. sets over the years: Drive, These Days, Sitting Still. But Carnival of Sorts? 1,000,000? And last night West of the Fields, Harborcoatâ wow! Those havenât been played (best we can remember) since 1984 and 1985, respectively. Thatâs some âolive branch!â Like many aspects of R.E.M., the nightly sets have been demanding in some sense (at least the guys think so with all the new material), but rewarding at the same timeâ maybe thatâs the point I guess. (BTW, I never look at setlists, which means I am surprised to when they launch into whatever comes next).

Anyway, the band has obviously embraced this somewhat unusual experiment and when they say the songs and future recordings are benefitting from the Olympia run-throughs, I believe them.

A couple of random thoughts on the week:

* the REMDUBWIKI thing we sort of made up as we went along has been alot of fun and cool to see develop and take on a life of its ownâ just as we had hoped it would but had no idea what that would mean. With alot of help from Damien Schaefer at Herosion, our web designer, and Ethan Kaplan, who is perhaps known to some of you, of Warner Bros Records and Murmurs.com, David and Chris have done a wonderful job of keeping the sites fed and nourished throughout the week with some good boots-on-the-ground content throughout the week. But then the community has taken over with blogposts, photos uploaded, tickets swapped, matches made, songs requested, and all the other connection stuff that the internet lets us all do. Having people around the world enjoy the shows vicariously through the technology has been a great thing to be a part of. When I read about Carnival of Sorts being overheard during soundcheck by someone in the alley with an internet connection. . . now that wouldnât have happened a few years ago.

* In case it has slipped by your attention, on the front page of HQ, we have a link up of Bad Day from the last time we played indoors in Dublinâ the end of February, 2005, when our film designer Blue Leach documented two powerful shows in the Point Depot. Watch here.

Tonight should be a cracker, as I think they say here in Ireland. So far, every night has been better than the one before, so I guess weâll see.