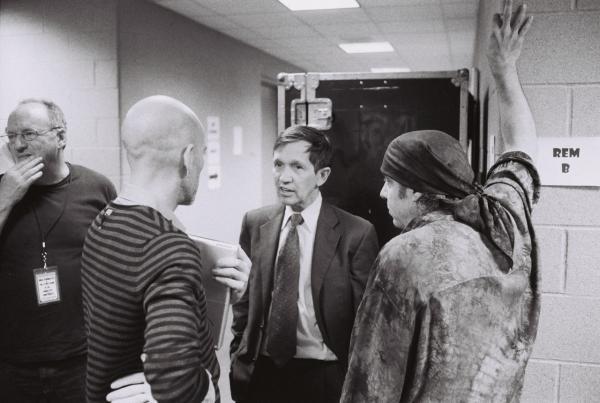 Magical night in St. Paul on Tuesday on the fourth night as the Vote For Change Tour rolled on. Great sets from all three bands and a special visit by Neil Young, who has been stopping by various VFC shows: Pearl Jam in Dayton, Dixie Chicks and James Taylor in Detroit, Dave Matthews in Auburn Hills and now, the Springsteen/R.E.M. Street band in St. Paul. âCanadian for Kerryâ¦â

Fired up crowd, as Minnesotains often are, fun day beforehand with Mike and Michael guesting on Al Frankenâs, Air America Roadshow. If you missed it, the Sundance Channel will re-broadcast the interview tonight (check local listings), all pointing toward the wonderful night of music ahead. Neil played with R.E.M. on âCountry Feedbackâ, then came out with Bruce on âSouls of the Departedâ and a roaring, soaring take of âAll Along the Watchtower.â Michael once again sang on âBecause the Nightâ and this time might have been the best of all, so farâ¦ And Mike and Peter got to play on âBorn to Runâ again — Mike always gets to help sing the âwhoa, whoa, whoaâ at the end through a wide smile.

Then in the encore, John Fogerty rejoined for âProud Maryâ and then the fun began. Everybody joined in for âRockin in the Free Worldâ, which had an intensity and fire and sheer volume that shook the whole place. âPeace, Love and Understandingâ and âPower to the Peopleâ followed, and a full five hours after the show began with Michael and Bruce at the microphone, it finally ended, with 18 very grateful and buoyant musicians on stage and 18,000 deliriously happy spirited fans knowing they had just seen a pretty amazing spectacle: Bruce Springsteen and the E street Band, John Fogerty, Neil Young, Bright Eyes and R.E.Mâ¦ and all for a very good reason. Vote for Change. All in all it was an astonishing night of music.

P.S. End note: last night marked the first time Neil Young had ever played with the E Street Band. He has played with Bruce before and long ago he was responsible for bringing Nils Lofgren to Los Angeles back in the âAfter the Gold Rushâ daysâ¦ but until last night he had not ever been backed by that full on fine-running machine. They should try it more often!

P.P.S. Last nightâs show marked the final one for Bright Eyes, who start a tour on their own in Texas on Friday. Conor Oberst and band have been tremendous participants on the Vote for Change festivities and Conorâs contributions, both on his own and in the epic encores, have been spirited, profound and â¦ youthful. He will be missed. And last night, along with Michael Stipe and Al Franken and Danny Clinch, several of Bright Eyes crew soaked in their last night of the triumphant journey together in the crowd 10 rows deep. That was fun. In Orlando on Friday, for one night only, Tracy Chapman will be playing with Bruce & R.E.M. and that is certainly worth looking forward to.

P.P.P.S. IF you havenât seen the new Kerry documentary Going Up River: The Long War of John Kerry, go see it! Great Film, and âAround the Sunâ (the song) never sounded better.