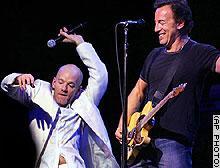 Already in Cleveland this sunny saturday. What an experience this swing state tour has been so far. I cannot begin to describe how wonderful last nightâs Philadelphia show wasâ from Bruce and Michaelâs opening explanatory âwhy are we here and what else is happening across the state with the other concerts/Vote for Changeâ, Â through the closing strains (more than 4 hours later) of People Have the Power. It was as exultory and joyful a night as one could imagine,well beyond my wildest dreams. Not sure how it can get any better than that, but if you have a ticket for any of the upcoming shows (Cleveland, Detroit, St. Paul or Orlando), you are in for a treat.

-Bruce Springsteen introducing R.E.M., who launched into the One I Love, then Begin the Begin and Leaving New York and, a few songs later, a stately version of World Leader Pretend and a special metallic filigree-graced Man On the Moon, courtesy of a certain guitar player from New Jersey (perhaps the best version ever of Andyâs songâ ya think?!)

-A short set change on the impossibly pristine stage. Itâs all right there in front of you– Â Â and before you know it, Michael intones âPhiladelphia, please welcome Bruce Springsteen and the E Street Band!â acoustic 12 string Star Spangled Banner Â and Born in the USA (appropriate), straight into Badlands and No Surrender (breathtaking) and no let-up from there. Promised Land never sounded better.

âif I could take this moment into my hands…â Â indeed.. Â Â Â Â

Because the Night featured a strong-voiced Michael Stipe, then Peter and Mike got to join in for the song-of-songs Born to Run,and everybody, including John Fogerty and Conor Oberst of Bright Eyes, came on for the finale couplet of Whatâs So Funny About Peace, Love and Understanding and People Have the Power.

Four more of these. We are blessed – the music – the musicians – the message – the audience.

It was truly one of the very special nights for all of us.

p.s. – You can read some more objective reactions here: