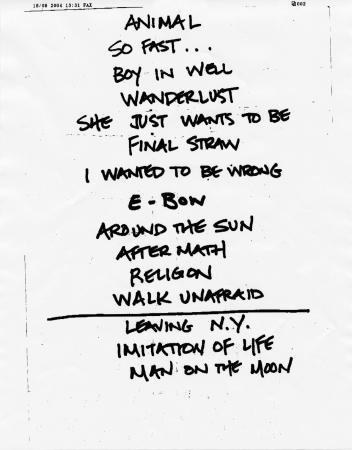 Well, after last night, Iâm glad to report that it indeed feels like a
tour. The band played a spirited hour plus set last night for a gracious,
enthusiastic audience of fan club members and radio competition winners.
Highlights were many:

* The public premiere of several songs off the new record,
including Around the Sun, Wanderlust, Aftermath, Boy in the Well and of
course, Leaving New York, which gets a powerful live rendering;

*One of the rare times they brought out E-Bow the Letter, aided by a
loose, jovial Thom Yorke, who pulled off the Patti Smith lines with his
typical aplomb.

*The setting itself. St. James Church in the heart of Piccadilly is a gem of a building designed by the fabled architect Sir Christopher Wren. It imparted a special, one-of-a-kind-feel to the whole evening. The show rocked, the crowd had a great time, and the band did too. And the hosts from the church could not have been more hospitable. The show will be edited and aired on Radio 2 in October.

It makes us really look forward to the shows coming up in the States and beyond. And speaking of shows, while here in London the band went to Radio 2 to announce the remainder of our European shows for 2005. Listen to the interview.

Today, the guys are performing on the Michael Parkinson Show, to be aired this coming Saturday. Plus a photo shoot, more radio interviews, pretty much the usual stuff of a promo tour. But a little out of the norm, Mike and Michael will be interviewed live tonight on This Week, a national news show. The topic? What else: the upcoming American election. Popular topic these days.