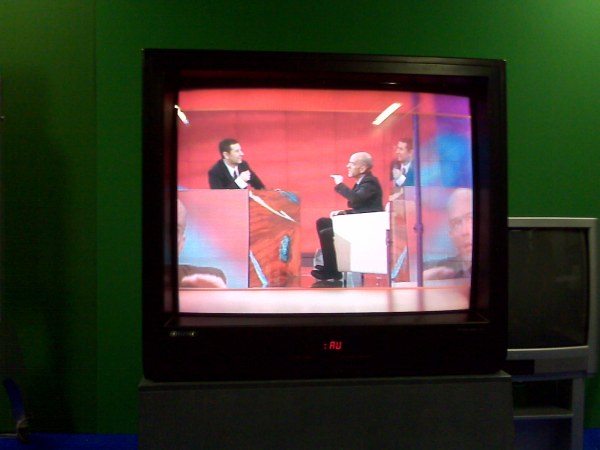 Sitting here on the traditional (for me) day of rest after a whirlwind week with Michael of almost a city a day of press around some of the great cities in Europe.

We started by hitting the ground running in London by visiting the studios of Radio 2, where Simon Mayo and Michael had a nice chat about the R.E.M. LIVE dvd/cd, online and stores now, as well as the new record coming out in the Spring and a few other topics of interest (interview runs today, Monday, 29th, at 11:30PM UK) and you can listen here. That night we took in Anton Corbijnâs masterful new film, CONTROL, just in release everywhere, and we had both wanted to see it anyway, and since Anton was on Jools Holland the next night with Michael, we especially wanted to see it post haste. It is a deeply affecting flim, and pays long overdue respect to the work and sadness of the late 70s Manchester band Joy Division. It is Antonâs first feature film, and clearly a labor of love for him since he took some of his earliest ârock photographyâ of Joy Division; both whatâs onscreen and the reaction it has received everywhere is overwhelming, and certainly the film deserves the many accolades being bestowed on it. Way to go Anton!

The next day was a busy one, especially for Michael, as he did a few interviews that will be turning up in the British press in the next weeks and months. He also did a guest appearance on Later with Jools Holland, where other than Anton Corbijn, the musical guests included the excellent band from New York, BATTLES, as well as ANGIE STONE, RICHARD THOMPSON and CROWDED HOUSE. That show will air on November 9th. In the meantime, click here to visit Jools’ site.

Wednesday morning dawned bright and early for us jet-lagged ones, but fly onward we did to Barcelona, then Madrid where Michael did a nice variety of press and TV appearances, including a fun late-night talk show with comedian Eva Hache. Madrid and Barcelona have always been favorite cities of ours, and once again, just like when we are on tour, we only regret not having more time there to do more than breeze through.

So somehow, with some careful planning, we have alighted in Milan for a few days of press for Michael, who will be on Fabio Fazio’s TV Show Sunday night; then maybe a little down time. Next week it is on to Cologne for a show we have done before, TV TOTAL, and then to Munich for the MTV European Music Awards, where Michael will presumably present an award.

So a quick but productive trip at a nice time of year to be here in Europe, where we are pleased with the reaction to the LIVE project– #5 on the considated European Chart in its first week. We are glad to finally have gotten that record and film released and we all owe Blue Leach, Brett Eliason and Emer Patten and their associates a lot of gratitude and respect in bringing that project to fruition. And we are happy and gratified that people seem to like it.

The new record is about finished, with Garret and the band slated for more work to do in the next few weeks. And yes, it rocks! Remdublin.com remains the best way to sneak preview it and the real thing will be out early in the year if all goes as planned. Tour? Probablyâ hope so. Under discussion . . . as they say.

I guess that is all the news from here. We all look forward to the year ahead. More to come.