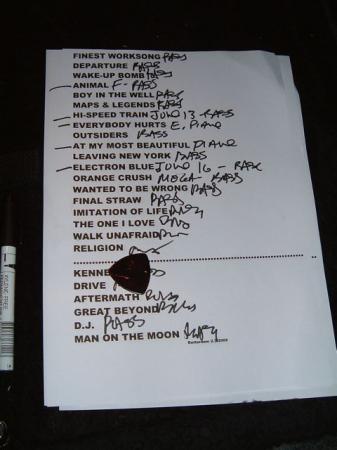 We are in Oberhausen Arena, where we last played the night after the 1999 Glastonbury appearance (leading to the No Shows the Night After Glastonbury Rule in effect ever since…); the Cologne area is a favorite of all of ours, with the amazing 2001 cathedral plaza free show still fresh, and a lot of TV/promo-tour stops here in Germanyâs media center. Today is a bracing not-so-cold day, a nice switch from recent forays in the northern reaches of Europe.

The Scandinavian part of the tour went great, with fine shows in Helsinki, Stockholm and Oslo, and there are more to come this summer, where the outdoor concerts are highly anticipated and mostly sold out; those are such wonderful Nordic cities, with awesome public transportation, well-designed arenas, beautiful parks, lively street life…we enjoyed the days and nights there as usual (and of course it didnât hurt that we were there for some picture-perfect snowstorms, none of which affected the shows…). Then last Thursdayâs show in Rotterdam was one of the best of the tour…cool to hear At My Most Beautiful and Maps and Legends back in the mix after a lengthy absence, and I really liked the colorful part of the set where Electron Blue gives way to a rocking Orange Crush, with the lights and screens vividly reinforcing those songsâ imagery…very energetic sets lately and the guys have never sounded better, or with the video, looked better.

This part of the tour has support from Dublinâs The Thrills. They are a terrific young band with two terrific records out (Peter plays on the most recent one, Letâs Bottle Bohemia and joined in on mandolin during their set last night and in Oslo). Last night, their singer Conor Deasy spoke of the first time any of The Thrills had been to a concert, and it was 1995 when R.E.M. played Slane Castle in Ireland–and now they are playing rousing opening sets for appreciative crowds here in Europe.

Another good aspect out here on the road is the arrival of the warm and elegant new tour program, featuring some terrific photographs by David Belisle and notes and observations by Michael; we will soon have a way for these to be ordered here on remhq.com, as they will make excellent souvenirs of the tour this year. Watch this space for details.

We will have a video for Electron Blue in the next week or two; as you might imagine, it will have a real live edge to it…and that is all I will say for now. The only place Electron Blue is out as a single to radio, the United Kingdom, is showing nice airplay already in stations programmed out of London, England, and who knows, perhaps it will catch on all over that mortal coil…the single comes out there just after we play the UK shows at the end of the month.

So anyway, everybody is doing fine, the shows are energetic and dynamic, it is a good time to be in Europe, and soon enough, we will be enjoying the sun and fun and new adventures of the southern hemisphere.