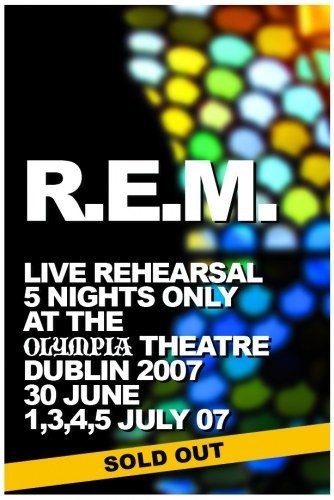 For a non-touring/non-recording summer, things are somewhat lively at HQ, with the RECKONING 25th DELUXE EDITION re-issue, the RECKONING SONGS FROM THE OLYMPIA Digital EP and the upcoming LIVE AT THE OLYMPIA Double Live Record coming in October keeping us busy and on our toes.

RECKONING was a wonderful record at the time (yep, 25 years ago says the calendar) and the songs have surely stood the test of time, with the most recent R.E.M. tour including 8 of its tracks at some point or another. So we decided to put out a little taste of what is to come with the OLYMPIA album by releasing 4 of the 6 RECKONING songs playing the band during the 5 night residency (mainly because they sound so good we wanted people to hear them sooner than later). We are hearing good reaction from iTunes and other digital services worldwide, and it is cool to hear recent versions of beloved songs like Pretty Persuasion and the rarely-played Letter Never Sent. A recent review that captured it pretty well is from a site called Consequences of Sound, and another on No Ripcord. You might have already seen the stellar reviews the Deluxe Edition garnered in Pitchfork and Pop Matters.

The bonus record comprising the band’s 1984 show at the Aragon Ballroom in Chicago is receiving a lot of attention– it has always been one of the most heralded bootlegs among those who know, and thanks to the gracious generosity of the good people at WXRT , we were able to include it in this special package.

We also have streamed Harborcoat on REMHQ and some film footage that has surfaced of several of the RECKONING songs (continuing on the theme). These scenes from Dublin were shot by the estimable Vincent Moon, and his colleague Jeremiah, of Takeaway Shows , Supernatural Superserious, and Ninety Nights fame (not to mention all their other amazing work with everyone from the National to Arcade Fire and the Shins, et al). One other interesting link to pass along on all things Olympia is the little poll on the indespensible Murmurs.com. There are certainly lots of songs to choose from over the course of the five-night stand, and of course like most things, everyone has an opinion– so weigh in over at Murmurs. And for further news on LIVE AT THE OLYMPIA, return to REMDublin.com which has been revived for its third incarnation as chronicler of all things R.E.M., Dublin and the Olympia shows (and now record).

This time last year we were in Dresden by the river– and seeing art and enjoying that city’s amazing urban life. This year, a little slower pace in the world of R.E.M., but with the upcoming record, there will be some good times ahead. And the demos the guys did a few weeks ago will once again turn into some special songs– just a guess (but there is precedent).

p.s. I am not going to be in London this weekend or Minneapolis next week, but if I was I would be going to see these guys:

Robyn Hitchcock and other luminaries coordinated by Joe Boyd in a celebration of English folk music: