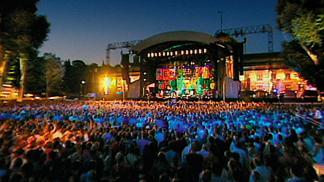 The guys are here in town writing/demo-ing for the new record, revisiting
some of the vanc bc stuff. Lots of new tunes too: lush and atmospheric….
just kidding! No attempt here to describe it other than to my ears it
sounds wonderful… some working titles I have seen up on the board include
âMagnetic North,â âI Wanted to be Wrong,â âAround the Sun,â âMikeâs acbgdâ
(or something) and âWanderlustâ; itâs been great having them all here. The
band will be heading into the studio in the next few weeks. Weâre hoping
for a fall record and hopefully will be touring some of the places we didnât
on the â03 tour (and some of the ones we did).

Meanwhile, Warners is preparing to release a DVD of the bandâs first
concert-film since 1995âs âRoad Movie.â I think I did a postcard from the
road (Wiesbaden) in July with my thoughts from the night. All
I can say after seeing what Julia Knowles did with the film is that it might be an even better film than it was a show (and it was a pretty rocking show!)â-she captured a magical night in a warm and singular way; Perfect Square indeed. I canât wait to get to share this one with friends, and the legendary and rarely-screened documentary âA Stirling Performance” (from Scotland in 1999) is the âbonus contentâ (gotta have it). We had just started the website in 1999 in time for the tour (after famously declaring that we had secured the title âlast band in the world without a websiteâ), and I must have done a postcard from the road after that rain-soaked 3-day stand in Brave heart country.

And speaking of the band and all its visual glory, be sure to check out HQTV on the site where you can see all kinds of cool and sometimes
obscure R.E.M.-related videos, snippets, and EPKs–pretty entertaining and
always on.