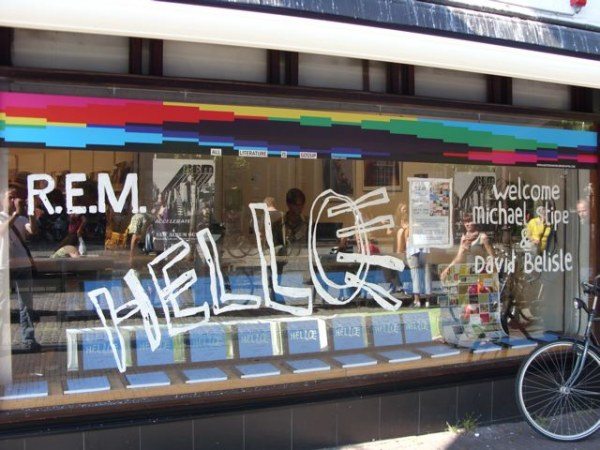 We are in Amsterdam, where Radiohead played Westerpark last night, and R.E.M., under foreboding skies, plays tonight–not a bad two-fer and many seem to have traveled from long distances to see both shows. Let’s hope the rain holds off…

Michael and David did their HELLO! book-signing at the American Book Center yesterday and about 500 people showed up; Bill Rieflin, pressed into service as a shutterbug, did a pretty good job as house photographer (additional photos below by Guillaume Ehrenfeldt and George Werner)…

We seem to have started lots of tours in this part of the world, most recently in Utrecht in 2003, and from here we go to Werchter for the band’s seventh (7th) appearance at that great Belgium festival. One added treat for us is the support on both of the first 2 shows by, MODERN SKIRTS a band from Athens GA that we all like and were over here for a shot at Glastonbury on the weekend. They play early tomorrow, in about the same slot as R.E.M. when R.E.M. played early on U2’s big day at Werchter (and Torhout at the time). We have since returned every other summer we have been here: 1989, 1995, 1999, 2003, 2005, and now 2008. Some festivals we like to play time and again–but none quite so much as Werchter.

This first week of the European tour holds some promise: the band’s first time ever to Bilbao and a festival near Girona two less obvious places in Spain, although we will return for Madrid and Murcia at the end of this run (late Sept/early Oct); then two shows in Roman-times amphitheatres in Lyon and Nice next week in France; then on to Dublin for OXEGEN (first time although we enjoyed it as punters during Dublin residency last year), and over near Glasgow for T IN THE PARK , one of the big Scottish days out. So it isn’t taking long for the band to get into the swing of the European festival and great midweek shows kind of thing– many highlights to come. I am especially looking forward to Italy in a couple of weeks (Perugia, Verona, Naples, Udine and Milan) bookended by Swiss festivals in Locarno MOON AND STARS and Nyon PALEO. I expect the band to pick it up where they left off on those last American shows and with the crowds and enthusiasm over here, take it up a couple of levels higher– here’s hoping.

As noted elsewhere on HQ, iTunes yesterday released R.E.M.’s first ever digital-only release: LIVE IN LONDON taken from the performance back in March at the Apple store on Regent Street in London. It is a great recording, mixed by ACCELERATE engineer Sam Bell, and a worthy addition to anyone’s iPod . . . so check it out!

That is about it from the midday shade of Amsterdam– here we go (again).

p.s.: For a good look at some of the USA tour action, check out this recent blog from Tony Fletcher of R.E.M. Remarks fame (among other fame things). Also, NME.com has a nice review of the NYC, Madison Square Garden show, just out, which you can read here.

p.s. 2: A pretty small guest list tonight (not quite like ATL) but some serious quality with people including Anton Corbijn one of Holland’s most famous exports and one of our dear friends in the world and among other things, has taken some of the great pictures ever of R.E.M. (not to mention a few other great bands); and Christopher O’Riley who has one of the more interesting careers playing serious classical piano as well as Radiohead covers, so to speak. Fun to have them here and know they will enjoy seeing the band tonight.