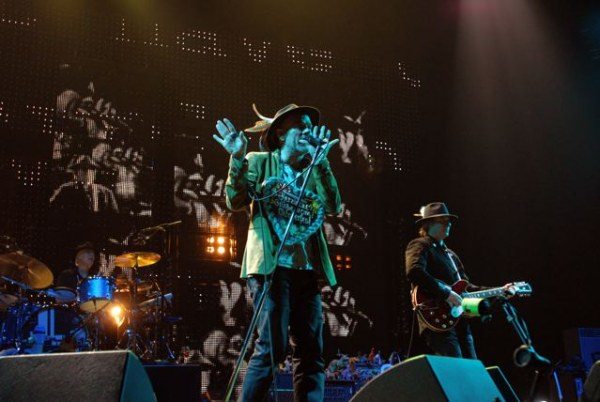 Tonight the band plays its final show in Switzerland for this tour, with an appearance at Hallenstadion in Zurich, and if recent indications are any sign, it should be a fantastic show. The guys are playing better than ever and the setlist is still growing almost 60 shows into the tour (since May in Vancouver). Just in the past week, new and old favorites have crept into the evening’s program, from I Took Your Name to Just a Touch to, last night for the first time in a few years, She Just Wants To Be . . . . and songs like rarely-played South Central Rain and Sitting Still have made the occasional appearance as well, along with the staples of this tour like Orange Crush, Kenneth and the hauntingly gentle accoustic rendition of Let Me In, which done the campfire way is a far different animal than the 1995 Monster incarnation. All the flux and unpredictability sure keeps things interesting onstage and for the many friends and fans who are catching multiple shows–I think there might have been as many Italians as Swiss at the Geneva show, best I could tell. Speaking of which, we head there tomorrow for Bologna and Torino, before accelerating down to Spain for a couple of bullring shows in Murcia near the coast and heart of Madrid, one of all of our favorite cities anywhere.

Last night in Munich, inspired by their visit to the amazing Hippodrome Beer Hell the night before, the entire band sported those little funny Bavarian hats for the encore of Supernatural Superserious . . . the words took on new and exciting nuances with Michael and his bandmates wearing those outfits, and the crowd seemed to enjoy the levity. I have never seen Michael share the microphone with a massive heart-shaped piece of gingerbread. As I have said before: every day is different out here.

In other exciting news, we finally are able to confirm the band’s appearance on October 5th at the old Olympic stadium in Athens, Greece, as part of the festivities for the launch of MTV GREECE. This promises to be a pretty exceptional night of music and celebration, as the last time R.E.M. played the “other Athens” was all the way back in 1999, so we look forward to returning and helping get the latest MTV Channel off the ground. The show will be broadcast live in southern Europe and on a delayed basis on other MTV channels around the globe, as we understand it. As usual, check local listings and we will try to keep the information up-to-date– it ought to make pretty compelling TV. Speaking of which, the first presidential debate takes place this Friday night [LINK] — we will be in Bologna after a show trying to stay up for it in the middle of the night. Some interesting times right about now, in a lot of ways…

As for R.E.M., a few more European highlights left in the next couple of weeks, then a break before a little USA action and then heading back to South America for the first “real” tour there before finishing in Mexico City on November 18th– you really ought to come see a show somewhere along the way if you can. Check out the LIVE page for remaining tour dates.

ps: Check this out for a laugh.