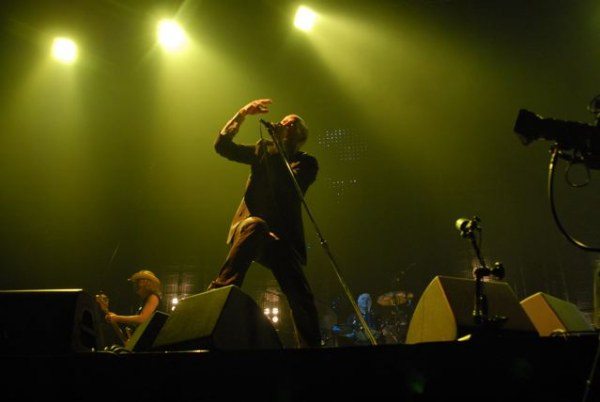 A little slow getting going this morning since we were up til all hours watching Round One of the Presidential Debates– a good opportunity for both candidates to show their stuff. We scored it even– kidding! Check out Progressive Blog Digest and Memeorandum for coverage.

for concerts (see a youtube clip from 1999 at the bottom of the postcard), promotional appearances, nights off with amazing food. . . maybe it is the academic “university town” atmosphere, or the architecture, with the colonnades of portici enveloping every building throughout the city . . . maybe the bustling energy of the place. . .or more likely all of the above. What a great place and what a great show.

Last night we had some really great friends, both old and new, in the audience and the always-loud and rocking Italian crowd in the Palamalaguti Arena on the outskirts of town. From the word go, with the familiar opening salvo of Living Well, the show had a bristle and a spark that made it stand out from most nights. . . and when the band went into the all-too-rarely played classic Maps and Legends, I got a little wistful in remembering the first time I heard that song finished– when the Test Pressing of Fables of the Reconsruction arrived at my apartment back in 1985. Gravity is a great song, don’t get me wrong, and it was and is a classic opener for that underrated album. . . . but when the first chords of Maps and Legends kicks in . . .ahhhh! YES! It was fun feeling that again.

We are day-driving to Turin tonight, and this is the first time we have played that city in about ten years . . . then on to Spain tomorrow and later in the week, our first trip to Istanbul (VP debate at 4 a.m. local time on Thursday night) and finishing up in Athens, GREECE for MTV’s big launch concert for their newest channel–MTV GREECE. In that setting (the original Olympic Stadium in the shadow of the acropolis) ought to make for some good music and some good television– which is a nice way to finish the European part of the tour this time.

Gardening At Night from 1999 where the band played Dall’Ara Stadium in Bologna:

R.E.M. HQ @remhq
10 hours ago
UP ⬆️, R.E.M.'s 11th studio album, was released on this day in 1998. The album was produced by Pat McCarthy and yielded four singles including "Daysleeper," "Lotus," "At My Most Beautiful" and "Suspicion."