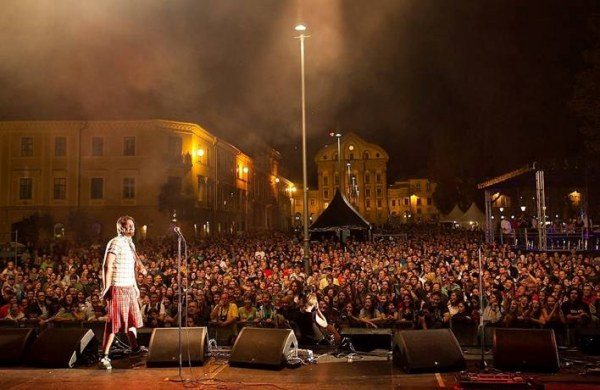 This past Saturday September 8th, the US Embassy in Slovenia held a free concert at Kongresni trg in Ljubljana for an estimated crowd of 12,000 people who came out in support of both great music and the environment. The concert coincided with the release of Projekt R.E.M.: Pure Energy Music, a CD featuring songs by popular Slovenian artists–Siddharta, Elvis Jackson, The Tide, N’toko, Vlado Kreslin (backed by Croatia’s The Bambi Molesters), Zoran Predin paired with Massimo SaviÃ Â, Melodrom, Severa Gjurin, Murat & Jose, Narat, Lollobrigida, My Buddy Moose with Chris Eckman, Polona Kasal, Mia ÃÂ½nidariÃ Â and Steve Klink Trio, and The Toronto Drug Bust–covering tracks ranging from the early 1980’s right up to material from 2011.

According to embassy official Chris Wurst, “The concert was a huge success… with an estimated 12,000 filling the town’s main square for five and a half hours of music.” A video message from Mike Mills was played three times over the course of the evening, Wurst noted, and “received huge applause from the crowd each time.”

Here are some highlights from the concert along with links to photos and news coverage:

Check out the remarks by Ambassador Joseph A. Mussomeli.

Visit the Embassy’s Facebook Page for a photo montage.

Press Roundup of the concert: