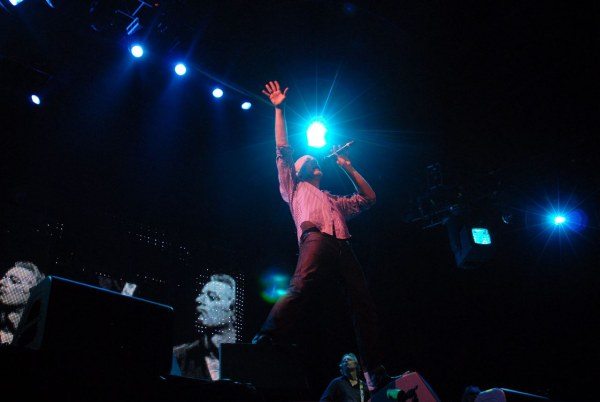 We enjoyed a day and night off here after a couple of fun shows in Norway–indoors in Oslo and an amazing site in Bergen. Both are interesting cities–Oslo, home of Ibsen, Munch and the awesome Literature House, we know from many trips there since earliest times; this time, we caught some lucky end of summer/early fall weather, staying intown near the waterfront and parks and squares. We buzzed through Bergen so got very little time in Norway’s second city, but the short time we spent there was done well. Bob Whittaker and I snuck into town for a bite to eat and on the way back along the pier heading toward the show every bar had a crowd of people socializing before the show and prepping to the sound of a different R.E.M. song emanating from the various storefronts– sort of a “gameday” feeling . . . the show itself was framed against the mountain and the water and the band responded to the setting with a raucous, go-for- broke set including some favorite warhorses not heard in awhile–Wolves, Lower was my favorite; Harborcoat and the plaintive arrangement of I’ve Been High sounded especially good too.

Next up is Copenhagen tonight, and we all had a chance to explore this bustling, cosmopolitan city, with its unique blend of old, vernacular architecture and neighborhoods and shops/cafes, along with all the contemporary design and fashion modern Denmark is famous for.

From here, Stockholm tomorrow and then Helsinki and the Balkans next week. . . and fun to see on HQ that we have finally announced the South American shows at the end of the tour. We have only been there once and that was essentially a long weekend, centered around Rock in Rio in 2001– this time with ten shows and six countries, it will be a proper tour of the continent, one we know is long overdue.

Two notes in case you haven’t checked them out: