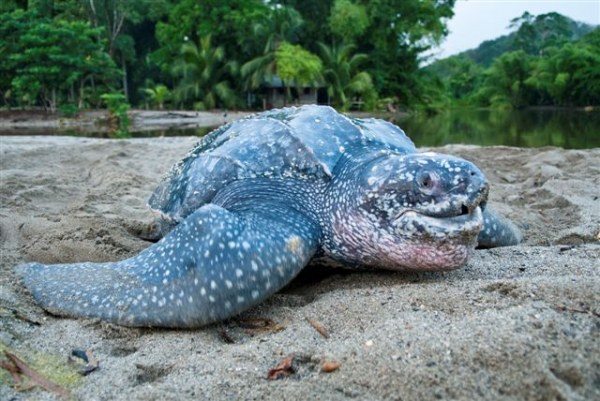 On Thursday, April 16, eleven leatherback sea turtles will embark upon an epic adventure from their feeding areas off Canada’s Atlantic coast to breeding sites in the warm tropical waters of the Caribbean. As they journey the more than 6,000 KM from the Atlantic to the Caribbean, the turtles will compete against one another in the GREAT TURTLE RACE, an event sponsored by Conservation International and National Geographic. The Great Turtle Race race is part of an ongoing effort to help protect sea turtles and their habitats. Funds from this year’s race will be used to preserve important nesting and feeding habitats.

We are excited to announce that R.E.M. is sponsoring a female leatherback turtle called Nightswimmer who will be “coached” by Olympic champion Janet Evans (considered by many to be the greatest female distance swimmer of all time). Nightswimmer will swim head-to-head against ten other turtles with sponsors ranging from surfers, sea turtle biologists, and schools to fellow rockers Pearl Jam. At a press conference for the race Wednesday, Mike Mills had the following to say about R.E.M.’s involvement in and support of the Great Turtle Race: “At R.E.M. we are always looking for different and interesting ways to bring the environment into people’s consciousness, and I can’t think of a much better way than with these beautiful and majestic creatures that drift around and look so at home in the ocean. Our turtle, Nightswimmer, is huge and beautiful, and it is going to be very exciting to watch the progress of this animal as it goes along its merry way—¦ and of course with Janet Evans as coach I really don’t see how we could lose.”

Nightswimmer’s and the other turtles’ progress will be monitored online in a “virtual” race format which fans can follow at GreatTurtleRace.org.

“The magic of the Great Turtle Race is that it puts actual data from migrating sea turtles into a captivating, fun-filled format that draws attention to important biological research and inspires people to act on behalf of ocean conservation,” said CI Vice President Roderic Mast.

The Great Turtle Race site will feature a “race” map that follows the real journey of each turtle during the two-week race. Daily updates will feature guest bloggers, such as swim and surf champions, marine scientists and conservationists. Visitors can also play the Great Turtle Race online game and compete to dominate each week’s leaderboard. The Great Turtle Race coincides with the release of National Geographic magazine’s May issue, which contains a feature article on leatherback turtles by National Geographic Executive Editor Tim Appenzeller, with photos by award-winning photographer Brian Skerry.

Visit CNN.com and Reuters.com for articles on the Great Turtle Race from earlier today and read more below:

History of the Great Turtle Race:

This year’s Great Turtle Race event builds on the success of the first Great Turtle Race in 2007 that featured 11 female leatherbacks making their way from Costa Rica to the GalÃÂ¡pagos Islands. This year, both male and female turtles are on the official race roster competing in what Rowdy Gaines reports “will be a grueling marathon of more than 6,000 km. But the event is more than just a race to the finish line; the turtles will also face off in a series of mini-challenges such as the Deepest Dive competition. Even more to the point, this race extends far beyond the April 29 finish — the true race is one for survival, one that we all impact and one that has no certain end.”

Leatherbacks are spectacular animals that have been swimming Earth’s oceans since dinosaurs roamed the land. They can weigh more than half a ton, can dive more than a half a mile deep, and have the widest geographic range of any reptile. Currently, leatherbacks, like all sea turtles, are threatened by human actions such as incidental capture in fisheries (termed “bycatch”), consumption of their eggs, coastal development and ingestion of plastic debris. Leatherback populations have declined dramatically in some parts of the world, such as the eastern Pacific, where their numbers have decreased more than 90 percent over the past two decades.