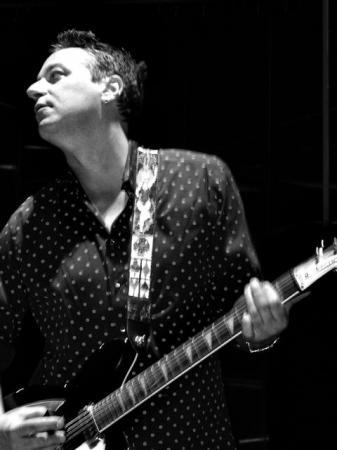 After Wednesday night’s summer tour opener in Granada, in which the band kicked off the concert with jaw-dropper/show stopper “Leave” from “New Adventures in Hi-Fi” for the first time ever, R.E.M stands poised for a big weekend in Spain with shows coming up in Torrevieja, Zaragoza, and Gijon. Who knows what surprises will be in store after such a monumental first show in Granada?

But for a moment let’s get back to the Granada show. As is our custom around here, we scoured the internet for reports and reviews hoping to do our part in providing regular visitors with the latest news from the road; we certainly came across our fair share of references to the band’s stellar set listâR.E.M. STUN FANS WITH RARITIES (nme.com)-âbut there was but one comprehensive online review of Granada that we were able to find…and much to our collective chagrin, it was only available in Espanol; further, given that HQ’s linguistic expertise lies in a somewhat shaky command of our own native tongue, we were driven to one of the most reliable, cutting edge tools to have emerged in recent memory, the online ‘free-translator.” It was with great anticipation that we cut and pasted the text and pressed enter…and voila!â¦after 5-6 seconds of waiting, we were prompted to “receive our free translation now.” Needless to say, just as the headline read, we too were “stunned” with what we found. So, without further adieu, we present to you the following review of the Granada show. Suffice it to say, that although we were hardly convinced that it was either a positive or negative review prior to the translation, we are even less convinced of what it says now!

The group offered in Granada a concert of worship and tranquil, that dazzled to the fans of all the life A put in scene with potentÃ­simos play of lights served to encourage to the more than 9. ooo assistant

It was finishing to get dark, in the sky there was some that another star and in the entarimado of the Stadium of the CÃ¡rmenes a galactic one appeared Michael Stipe, sheathed in a black suit, with red tie and a cap that lasted put two seconds, the just before launching the token to the first rows.

Once they surpassed the elucubraciones on the number of assistants, in front of the type of Athens they were given quotes some 9.000 fans, who they hallucinated when the key of ‘on’ activated a waste of lights, pipes of neon and screens of video that projected images in direct and you take of the last videoclips of the group. The scenography of summer -presented yesterday in Granada- has changed very little with respect al ‘tour’ of winter. It has disappeared the emission in direct of images of the public and they have been added a species of luminous elevators that do not cease to descend and to rise al fund of the scenic assembly. So much in summer as winter version, the lights that wrap to the members of REM are efectistas, chameleon-like -they adapt to the music-, and start the better comments of the respectable one.

With its habitual painting

Among the tangle of electricity -being hidden behind the blue mask that itself there is attorney in the last times of the face of Stipe-, the tiny mouth of the singer of REM intoned the first notes: ‘Leave’, a theme of the ‘New Adventures in Hi-Fi’ (1996).

The election of a song so crÃ­ptica to open the concert caused foretold what subsequently was going to confirm note to note: was a recital slowly and intimate that -to good insurance- enjoyed more the ones that carry continuing to the formation many years. The majority of the repertoire was centered in ‘Around the sun’ (2004), whose notes were scattered very tranquilly by the field of soccer.

The second fear that fell in the night was ‘Animal’, an unpublished one that appeared in ‘In time: The Best of REM. 1988-2003’. Then it remained clearly, the things painted too peaceful and thus they remained along all the night, in spite of the continuous provocations of Stipe and their reiterativas Â«thanks and thank youÂ» al final of each theme. Exactly almost in the crowning of the third canciÃ³ndecidiÃ³ to be tucked the shirt and to teach their bony bust. With cositas thus went heating the session, that only managed to explode in themes as ‘Daysleeper’, ‘Bad day’ -to half of concert and with a Stipe so generous that launched al public the harmonica that he had sucked minutes before- and ‘The one I love’, that sounded past the equator of the recital, already with a ‘frontman’ without jacket and delivered over the boards, but without being destroyed so much like he is accustomed.

Before those climactic points had sounded ‘The outsiders’, a theme that in version of study includes a small contribution of the rapper Q-Tip. Stipe rapeÃ³, the tie was removed and its fans thanked the deliriums that its idol is brought ultimately with the hip-hop and the electronic music. Many of the ones that last night congregated in The CÃ¡rmenes have grown with REM and they have learned to tune up the ear more alla of the country one and the folk-rock one with the one that began these veterans.

But ‘Around the sun’ is an album so intimista that caught unprepared al public of granada. Peter Buck was audible but invisible; Mike Mills was grasped al low but without wasting its usual scenic sympathy. The two, next to Stipe, they defended worthily on the boards songs as ‘Wanderlust’,’Final straw’, ‘Wanted to be wrong’ and ‘Electron blue’, all they included in the last one cedÃ©, with clearly smell to pacifismo and political demands. ‘Leaving New York’ -the first one single of ‘Around the sun’ -, a melancholy song with choruses of Mike Mills, transported around the eleven at night to the audience, that went mentally to the American skyscraper. One of those moments calmos and almost private that occur in the repertoires of REM.

With ‘Losing my religion’, chosen to conclude the task, the hands they raised themselves, the mobile, the spirit and, again, the spirit REM. Pity that was the farewell. The end of a first time that still would offer pearls as ‘Imitation of life’, ‘Great beyond’, ‘Drive’ and ‘Man on the moon’, temazo chosen to say good-bye the appointment of granada. An encounter in which, in spite of the shirt of moles of Peter Buck, do not there was a lot of grace neither saltcellar, but more well formal austerity biensonante. The products of official marketing, manufactured with labor well paid and processes not contaminants, and the pamphlets of ONGs scattered by the floor they completed a stamp that betrayed that the ones that had touched were something as well as an independent group, of worship and with many media.

In spite of the fact that among its followers is counted a lot intellectual, the populace did not go dazzled and miss its more commercial facet.

The expectation created in around al concert of R. AND. M. in Granada was unusual by various motives: is a matter of a band totÃ©mica that carries more than twenty-five years in this of the music and -the shocking thing- without doing commercial concessions, landing in the city of the Alhambra as Andalusian only date and having that to scramble with an abrumante media pursuit. Besides it supposed the first concert of rock in the New Stadium The CÃ¡rmenes, that before only had harbored endemic recitals of Alejandro Sanz and Operation Triumph. The high price of the entrance and the amplitude of the precinct perhaps they have been the causes that some extremes of the graderÃ­o to light up uninhabited. Nevertheless, what last night they witnessed the of granada was a spectacle with difficulty repetible.

After the step of a warm afternoon, among the prior discrete one with the supports Fable, they burst in the diaphanous setting Peter Buck, Mike Mills -wrapped by the already veteran musicians of support Ken Stringfellow, member of The Posies and producer of the local band Cecilia Ann, and Scott McCaughey, of The Minus Five- next to the recent incorporation of the former battery of Ministry, Bill Rieflin. In last place appeared Michael Stipe, sheathed in dark suit and tie, with expensive average painted. The eccentricity took position.

R. and. M. did not they come arranged has to unfold a foreseeable musical speech, plagued of âsingles’, and they clarified it opening with âLeaveâ, song of the wasted âNew adventures in Hi-Fiâ, that in nine years of existence never they had interpreted in direct. Herself was not mistaken Stipe when to its arrival to Granada affirmed âI have the sensation that will be a powerful concertâ. And the fact is that the electric guitars of Buck bore the weight of a sonorous binge that played al forgetfulness in every moment: âI Am fast, I am numbâ of the work mentioned, âMe in honeyâ (closing of the essential one âOut of timeâ, intact since ten years ago) or the rescue of it forgot pearl of the past âWorld leader pretendâ. To nobody imported to recognize or not each theme, because all he sounded to important piece, to potential hymn. Any thing sung by Michael Stipe becomes a beautiful litany.

The other thickness of the concert was the last work of the band of Athens. âAround the sunâ is a disk carried out by the urgency to supersede to Bush of the presidency of US, what seriousness conferred when the cameras aimed al text of âI wanted to be wrongâ or the feeling âfolkie’ impregnated âFinal strawâ.

Before arriving at them repeat Stipe not to stopped declaiming one of their favorite themes: âWalk Unafraidâ (whose initial verses were composed by the leader of U2, Bond). And in the pertinent one I threaten of closure, the reason why many had paid the price of the entrance: âLosing my religionâ. Few times the people asks âanotherâ with so much fervor, rare time they return all home with a smile in the face.

This label that Lou Reed added in the shape of disk serves to define al âfront-man’ Michael Stipe. The timid university student that in its day studied Art becomes in voracious star when steps the setting. A scenic theatricality tanned along more than two decades of boards, arriving at âto be picnicked’ al public with craving by means of poses, looks and extravagant dances. Thus it is Mike, an escuÃ¡lido cuarentÃ³n of skull rasurado capable to conduct emotionally all a stadium of souls.