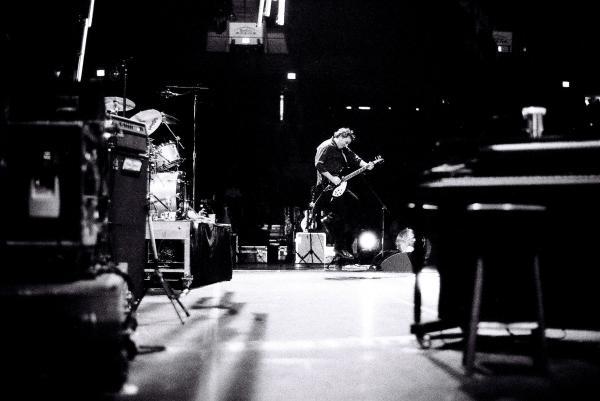 In addition to the big news surrounding the release of the I.R.S. Years CDs and DVD this September, the guys have been staying very busy with various side-projects and appearances. Here is a quick run-down of what’s happening on the R.E.M. front over the next few weeks:

The first new NY Dolls record in 32 years hits stores today and features a track with Michael on vocals. âDancing on the Lip of a Volcanoâ is one of thirteen new songs by the Dolls who also turn to Iggy Pop for a vocal assist on their comeback album titled “One Day It Will Please Us to Remember Even This.â

Mike heads to the Midwest on Sunday where he plans to stop by the New Orleans Musicianâs Relief Fund Concert at the Black Orchid Theatre in Chicago. The NORMF Concert will benefit Composer Wardell Quezergue and other New Orleans music legends and will showcase a set by legendary NOLA piano man Dr. John.

NOMRF was founded by DBâs bassist, Jeff Beninato, and has received support from R.E.M. friends, Wilco, and DBâs Peter Holsapple among others.

PETER AND MINUS FIVE GO TO HOLLYWOOD

Peter and the Minus 5 will take their well-travelled brand of high-energy melodic rock to the House of Blues on August 27th as part of Rickenbacker Guitarâs â75th Anniversary of the Electric Guitarâ benefit concert. The Minus 5 will share the bill with Jefferson Starship, The Smithereens, and a host of other acts. For more, please visit ric.com

R.E.M. will join a distinguished list of class of â06 inductees, including Gregg Allman, Dallas Austin, Felice Bryant, and Jermaine Dupri, at this yearâs Hall of Fame ceremony at the World Congress Center on September 16th. Please visit the Gamusichall.com for more information.