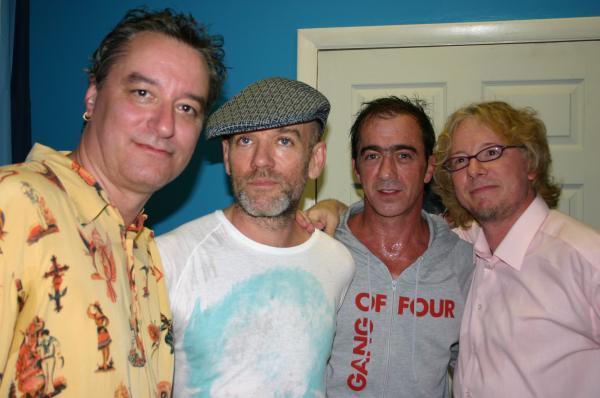 The band put together an impromptu performance tonight in Athens at R.E.M guitar tech Dewitt Burton’s wedding reception. Roughly three-hundred people packed into a tiny arcade room at the bowling alley where the reception was held as Peter, Michael, Mike, and Bill Berry ripped through a scorching seven-song set that included “Sitting Still,” “Rockville,” “Wolves, Lower,” “Begin the Begin,” “The One I Love,” “Permanent Vacation,” and “Radio Free Europe.” It was the first time the original lineup has performed together since a concert in Raleigh, North Carolina, during the In Time tour in 2003. Michael Stipe toasted the bride and groom, Jackie and Dewitt, on several occasions throughout the set as the reception guests yelled request upon request at the band–“Begin the Begin” was requested by the bride. Asked what he thought about the set and the evening, Mike Mills commented that “It was awesome to look behind me and see Bill on drums.”

A good time was had by all, with chillbumps, phone cameras, cold beer and throat lumps all co-mingling!