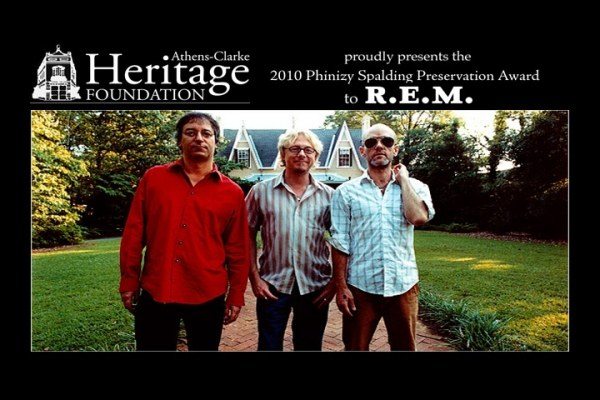 In her remarks announcing the award, Athens-Clarke Heritage Foundation Executive Director Amy Kissane said, “R.E.M. has long been deserving of this award but this year seems particularly apropos given that it is their 30th anniversary. This award is not an indication of the end of their contributions; simply a very heartfelt thank-you from the Athens-Clarke Heritage Foundation and the community for all they have done, individually and collectively, and a recognition of what we know will be their continued positive influence.”

“The award was named for Phinizy Spalding, a fixture in historic preservation in Athens for over two decades,” Kissane noted. “Phinizy was a noted and loved history professor at the University of Georgia,” she added, “and his influence is, in small measure, reflected by the 4 awards the Heritage Foundation bestowed upon him—¦starting in 1972 with a Community Service Award and then, over the next 25 years, three more awards for restoration, rehabilitation and, most notably, his role in saving the Seney-Stovall Chapel where R.E.M. most recently recorded Accelerate.”

In celebration of R.E.M.’s contributions, the Heritage Foundation commissioned a video reflection on R.E.M., their history in Athens, and their connection to Athens history. The video was produced by R.E.M. Archivist Dan Aguar of digima24.

Following the video, the award was presented by ACHF lifetime member Margie Spalding to Mike and Bill. Spalding emphasized the mutual affinity shared between her husband Phinizy and R.E.M.: “Phinizy was a huge fan, enjoyed knowing them, and had great respect for their sense of responsibility and maturity as a successful rock band. Their support of causes important to the community sent a significant message to their fans over the years and hearing of their love of historic preservation was music to his ears. He would be first in line to present this award, but I would be elbowing him out of the way.”

In accepting the award, Mike, who was flanked by Bill, said “Receiving this award is an honor because it is named after our friend and mentor, Phinizy Spalding. We knew him as a friend and as a community activist and as a historic preservationist. His passion for this was both infectious and inspiring, and I think we learned a lot about not only how to be involved but why to be involved in this from Dr. Spalding. So much of his vision and his love for Athens is still evident in this town, in the theatre where we are now and in the Seney-Stovall Chapel where R.E.M. has been lucky enough to work several times over the years. And so in that sense, I think it is the greatest honor of all. On behalf of Bill and Peter and Michael and Bertis and Sarah and Mercer and David and Amy and Kevin and Chris, thank you very much.”

In addressing the audience, which consisted of members and trustees of the Athens-Clarke Heritage Foundation and other Athenians, Mike noted, “You are responsible so much for the quality of life in this town, not just for those of us who are fortunate enough to live here but for all the people who are moving here, who want to move here because they want to live in a town where commitment to historic preservation is not just lip service, it’s how we live.”