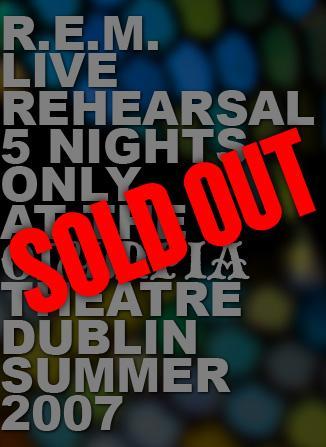 *****SOLD OUT!*****
We are excited to announce that R.E.M will take up residency at the legendary Olympia Theatre in Dublin this summer for a five-night “Working Rehearsal.” The shows will occur on June 30th, July 1st, July 3rd, July 4th, and July 5th.

As previously announced on remhq.com, R.E.M. begins work on their next record later this spring with producer Jacknife Lee who has produced records for U2, Snow Patrol, Bloc Party and Aqualung.

The five shows in Dublin will showcase songs from the forthcoming spring recording sessions with Lee, and, as such, will be a rare opportunity for the band to play new material for a live audience before the tracks appear on the band’s 14th record. Lee, who met with the band in Athens in February, calls R.E.M.’s new material “some of their most exciting and visceral yet.â

R.E.M. front man Michael Stipe and bassist Mike Mills checked in with HQ earlier this week and had the following to say about the Dublin dates:

âReturning to Dublin for our live rehearsal this summer provides the great start we need for our next albumâs work,â says Stipe. âI intend to hit the ground running.â Mills says the band chose the Olympia, an historic music hall built in 1879, because of all the great shows theyâve seen there over the years: âFrom the Waterboys to Lou Reed. I am thrilled to play at this wonderful venue, and in front of some of the best fans in the world,â he says.

TICKETS ARE NOW ON SALE

For more information about online ticket sales please click here. Tickets may also be purchased at the Olympia Theatre Box Office beginning tomorrow morning at 9:00AM.