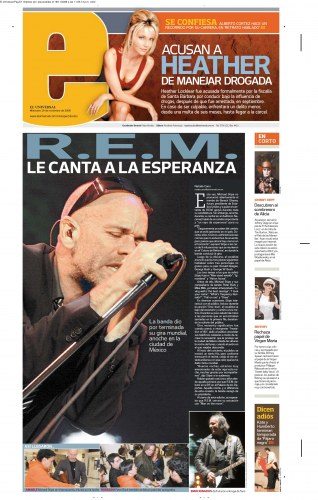 R.E.M.’s world tour finished on a strong note Tuesday night with a stirring show in front of an energized, packed crowd in Mexico City. The finale featured a surprise six-song encore highlighted by two rarely-played gems, “Life and How To Live It” and “I Believe.” The Mexico City concert closed out a six-month tour which began way back in May in Canada. The tour took R.E.M. through 32 different countries where they played a total of 77 concerts. Thanks to everyone who came out and checked out a show and special thanks to those who participated in the toursite by posting photos, videos, and tweets.

To see more on the Mexico City show, please explore the following links:

ps: Don’t forget the special event in Athens on Tuesday, November 25th, celebrating the 25th anniversary of “Murmur” and the release of “Murmur Deluxe” on Universal. The 40 Watt will be the scene of “Perfect Circle: Athens Bands Play R.E.M.’s Murmur” at which several talented local bands will perform songs from R.E.M.’s debut record. Proceeds benefit Community Connection of Northeast Georgia & Family Connection/Communities in Schools. For more information on “Perfect Circle,” please visit Athensmusic.net.

On November 25, 2008, the two-CD 25th Anniversary Deluxe Edition of Murmur will be released on Universal. The two-CD set features R.E.M.’s debut album, remastered, plus an additional disc with a previously unreleased concert recorded at Larryâs Hideaway in Toronto, three months after Murmurâs April 1983 release.

The 16-song live performance boasts nine of Murmurâs 12 songs, including âRadio Free Europe,” three songs from the Chronic Town EP, early renditions of “7 Chinese Bros.” and “Harborcoat,” as well as âJust A Touch,â eventually a track included on R.E.M.âs fourth album, 1986âs Lifes Rich Pageant. The live set also features a cover of the Velvet Undergroundâs âThere She Goes Again,â which R.E.M. recorded in the studio for the b-side of âRadio Free Europe.â

For more information, please click on the Murmur Deluxe banner on your right!