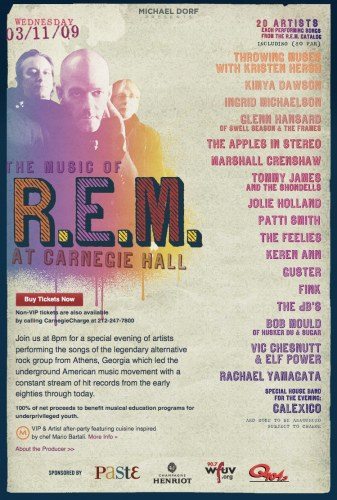 On March 11, 2009, a host of bands and solo artists will convene in New York City to perform songs by R.E.M. at a special tribute concert at Carnegie Hall. The event is the brainchild of Knitting Factory founder Michael Dorf who has organized similar tributes honoring musical icons from Bob Dylan to Bruce Springsteen. “The Music of R.E.M. At Carnegie Hall” will begin at 8pm and each artist or band will perform one song by R.E.M. One hundred percent of net proceeds from the concert will benefit musical education programs for underprivileged children.

The Apples in Stereo

Tommy James and the Shondells

For The Evening: Calexico

Please click here for more information on how you can reserve a ticket. Non-VIP tickets are also available by calling CarnegieCharge at 212-247-7800.