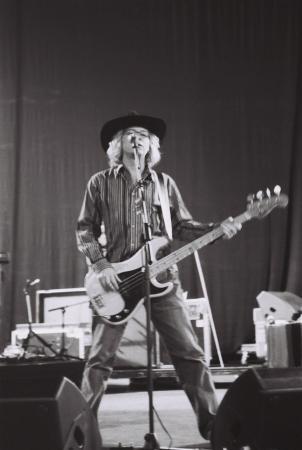 The following column appears in the Op-Ed section of today’s Orlando Sentinel. R.E.M. will peform in Orlando this Friday as part of the Vote For Change Tour.

Vote for Change
Mirrored from OrlandoSentinel.com

As weâve traveled around the United States the last year or so, weâve sensed a growing unhappiness with the direction of our country. We started talking about it in the band and realized we all felt the same unease. In the past, weâve always pretty much worked as individuals and stuck mostly to local politics because we felt that is where one can really make a difference. But in this situation, we felt we had to do something as a group. If there were ever a time to speak out, this is it.

We want America to put a new president in the White House.

We travel all over this country, which gives us an opportunity to speak with people from all walks of life. The press may talk a lot about a supposed great cultural and political divide in America, red states vs. blue states, right vs. left, but we see a different America. We see a nation of shared values and common purpose âa desire for peace and prosperity, equality and opportunity, democracy and freedom.

Thatâs what these elections are about: the soul of America. Under president Bush the rich have gotten richer, the poor are poorer and the middle class has lost ground. The number of people in poverty is up by more than 4 million, many of them children. One million jobs lost since 2001 is the worst record of any President since the Great Depression. More than 5 million Americans have lost their health insurance since Bush took office. That is class warfare.

This administration is amazingly inept and incompetent. John Ashcroft in charge of justice? The man thinks dancing is a sin. Look at all the people theyâve arrested and held for months only to release them when they canât make a case. Dick Cheney formulates our energy policy in secret meetings with energy producers and no one else. Donald Rumsfeld tries to transform the military yet ignores the advice of his generals, contributing to the quagmire in the Middle East. One thing theyâre best at is hiding the true nature of what theyâre really doing behind great sounding names. âHealthy Forestsâ lets the timber companies clear-cut more of our national forests. âClear Skiesâ lets the corporate polluters off the hook. This administration constantly says one thing and does another, and that is wrong.

Worst of all, President Bush led us into war in Iraq under false pretenses, with no clue about what would happen after we occupied the country. His neoconservatives cooked up a bunch of unverified intelligence on supposed Iraqi weapons of mass destruction and sold it to us as fact. So now weâve lost more than 1,000 brave Americans with 7,000 maimed and wounded, the majority since Bush declared, âmission accomplished.â There doesnât seem to be any plan for getting out, but he keeps insisting all is well in Iraq even though a recent intelligence report from the CIA paints a dismal picture of possibilities there. That is deception, not leadership.

Now, in this campaign, Bush and Cheney seem to have decided to try to scare people into voting for them. Their convention was a weeklong attack, filled with foam-at-the-mouth speeches and outright lies. They continue to try to put fear into the hearts of Americans. Dick Cheney even predicted a terrorist attack if we do not âmake the right choiceâ and vote for his ticket. These are the politics of fear.

Remember how it was after September 11th? We stood together and the rest of the world stood with us, ready to help. But President Bush wasted that sense of unity by leading us into an optional war in Iraq. He accomplished what the terrorists could not: He united our enemies and divided us from our friends. Now his reelection campaign seeks to do the same to Americans — to divide us from one another.

We canât tell you who to vote for, but weâre going to vote for John Kerry. He is a man of experience, conviction and intelligence; possessing in abundance the qualities America needs in its President. If you are still undecided about this election, we urge you to read as much as you can about the Bush administration. Look at what theyâve done instead of what theyâve said. Look at the facts.

Then we hope youâll join with us and Vote for Change on November 2nd.

REM has joined with other artists to put on the Vote for Change tour.