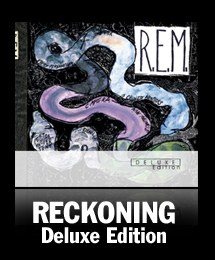 On June 23, 2009, Universal Music will release Reckoning – Deluxe Edition (I.R.S./A&M/UMe), a two-CD set, featuring the original album remastered, plus a bonus disc of a previously unreleased concert recorded during the band’s “Little America” tour at Chicago’s Aragon Ballroom on July 7, 1984 (broadcast on WXRT) (see the clip just below the news from 6-9-84 for a glimpse of R.E.M. Live circa Reckoning). In addition, Reckoning and R.E.M’s 1983 debut album Murmur will be simultaneously reissued on audiophile quality 180 gram vinyl in their complete original packaging.

On the Deluxe Edition’s bonus disc, the band performs eight of Reckoning’s ten songs at the Aragon as well as “Gardening At Night” from 1982’s Chronic Town EP and “Radio Free Europe,” “9-9” and “Sitting Still” from Murmur. The band also plays two new songs that had yet to make it onto tape: “Driver 8” which would later appear on Fables of the Reconstruction and “Hyena,” later on 1986’s Lifes Rich Pageant.

According to the press release for the reissue, “Inclusion of the live concert is particularly appropriate for the Reckoning – Deluxe Edition. Whereas Murmur had been complex and painstakingly deliberate, the band’s Bill Berry, Peter Buck, Mike Mills and Michael Stipe, along with producers Mitch Easter and Don Dixon, saw Reckoning as a “chance to turn up the volume, tear up the rule book, and capture instead R.E.M.’s on-stage mojo.”

Liner notes for the Deluxe Edition are by Tony Fletcher, author of Remarks: The Story of R.E.M.

Reckoning peaked on the charts at #27, nine spots higher than Murmur (Rolling Stone’s 1983 “Album of the Year”) and was eventually certified gold.

Stay tuned for information on how you can pre-order your copy of the Deluxe Edition.