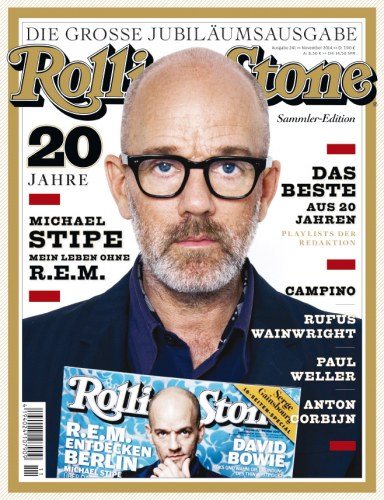 Birgit Fuss has written numerous features on R.E.M. over the years for Rolling Stone Germany and she is now its editor. For the 20th anniversary of Rolling Stone Germany, out today with Michael as one of its four covers, Birgit interviews Michael Stipe once again. Here she kindly agreed to write a special remembrance for REMHQ about her close association with the band throughout the last couple of decades…

When we first talked about who should be on the cover of our big 20th anniversary issue of ROLLING STONE Germany, my first thought was: R.E.M. (When it comes to favorite covers, favorite bands, favorite albums, favorite songs, my first thought is usually R.E.M.) And the second was of course: There is no R.E.M. anymore. But there is still Michael Stipe who has been on our cover quite a few time before, with or without the band. But would he be willing to hold an old issue with himself on the cover? We did photo shoots with Campino, singer of the biggest German rock band Die Toten Hosen, with Paul Weller and Rufus Wainwright, all carrying a ROLLING STONE issue with their faces on it. And then Michael agreed to do the same thing, the lovely David Belisle took some awesome pictures – and we had an exclusive we are so proud of now. I actually still can’t believe it happened.

Our other three cover stars talk mainly about the past 20 years, but Michael wanted answer questions about the present and future instead – which was fine for us. We hadn’t spoken since R.E.M. called it a day, so now for the first time we hear about his plans, about his decision not to exhibit his art in a big way so far and why – and that he is content with working for himself for now, rather than for a big audience. I don’t think a lot of rock stars manage to do that: to step away from the spotlight with such grace and apparently without missing the attention. Actually, I can’t think of any band that has ever done it. But then again, R.E.M. have always been different.

I have so many great memories of meeting them for stories. The first time I talked to Mike in 1996 when I was still working at a newspaper in Hamburg and studying. (My final university thesis was on – you guessed it – R.E.M. and their impact on alternative and mainstream music.) In 2003 I went to Vancouver to visit them in the studio – the atmosphere was quite tense, but I remember Peter going through the R.E.M. discography with lots of humour and insight, Mike being the usual intelligent “chatterbox” (as he called himself) and Michael soft-spokenly revealing so many interesting details about the working progress. And that is pretty much how they have been every time I met them: very kind and talkative. I also remember listening to the first songs of “Around The Sun” – and I will always insist that it is a brilliant album, even if they don’t think so themselves. What do bands know about their own work?

I remember talking to them in New York City twice, for “Accelerate” and “Collapse Into Now”, and meeting Michael in Berlin in 2010 where he came to the cafe by bike. And I remember so many great concerts over the years – in Dublin. In Cologne. In Berlin, Hamburg, Munich. In Milan. I have not seen one bad show. Fragile ones, sure. But not one without moments when I thought there is no other band like this, with such courage, such melodies, such heart.

And now? I love Peter’s albums, they are so pure. I am still waiting for that solo album Mike promised in 2011! And I will always be interested in anything Michael comes up with. These three people have not only been in the greatest band on earth, they are also great artists by themselves. And – maybe the most important thing – just great people.