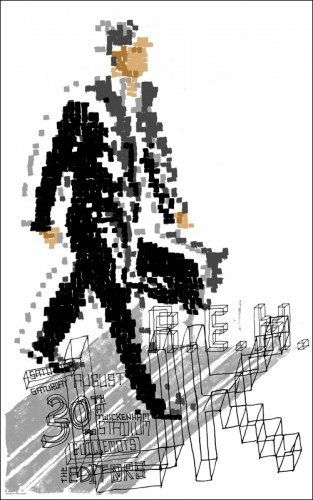 What a week it was in the UK– we were in and around London most of the week, except for the hop over to Paris for the Rock En Seine Festival (great one by the way) (and many of us pulled an all-nighter to watch Barack rock Denver– wow!). The UK shows were all strong in their own way and it is fun to hear the band still introducing songs not played yet on this tour (and in some cases in many years): Perfect Circle was the new/old one in London, New Test Leper for Cardiff. It always makes it fun to hear something from a period of time and especially a song you didn’t know they still had an interest in. Manchester was probably my personal favorite of the 4 in England this time through– a great northern crowd as we are always lucky to draw to Old Trafford, and a rocking set by a fired-up band. Others have commented on Cardiff being especially good indoors at the CIA and hearing the band in such a relatively intimate setting was indeed very special. The Southampton show at the Rose Bowl Cricket Grounds was also outstanding, and, the crowning show of the week at the hallowed Twickenham rugby stadium in the Richmond area of London was one of the many great ones R.E.M. has put on over the years–as always a ton of friends were there, from people we have worked with over the years, to fellow musicians (Robin Hitchcock, Nick Lowe, Jacknife Lee and all of Snow Patrol, among others) to “the industry.” And I think the largest number of early-admit fanclubbers (500 ) in London which makes sense. The sound and screens and lights on that soft, late-summer’s eve somehow worked just right to give the whole night a celebratory, joyous feel and by the time the guys pulled out the rarities Perfect Circle and Country Feedback (see video below) in the encore, as well as more expected End of the World and Man on the Moon . . . the place was completely up for grabs. And looking around and seeing many faces who were there for those November, 1983 shows (first time over) it indeed seemed a “perfect circle of acquaintances and friends. . . ” (UPDATE): Also, if you haven’t been to the merchandise store lately, we just learned that the very cool, limited edition Twickenham poster has just been added to the merch store. Click here for details (see image below)

One other note on the UK shows: both support bands, Editors and Guillemots were just terrific– great bands, wonderful songs, loyal fans, full houses everywhere for the whole show– both have bright futures and will not be opening for others for much longer. As Michael said in London and elsewhere what an honor for the guys to share the stages with such talented bands.

After a couple day’s breather in London, we are now in Oslo where we start a series of Scandinavian and Baltic dates in the next two weeks– playing some familiar capitols here in the north, as well as new-to-us locales like Bergen (check out the Bergen tour poster) and Vilnius–it is always good to get someplace not yet before visited, and the site in Bergen, the Bergenhus Festning looks pretty amazing. I remember the seond time the band visited Europe back in the IRS days– would have been Fall of 1984 and we came here to Oslo– the band played a show in an auditorium somewhere that was broadcast by the national radio station, NRK. We thought that was cool at the time and I am pretty sure that has been a pretty heavily-traded bootleg over the years from the Reckoning/Fables era. (Check out this link and scroll to December 1984 for setlist…); And I have always assumed that early exposure helped assure that Norway would remain a big R.E.M. place for what’s turned out to be a long time indeed.

PS: be sure to check out the photo below of Bertis’ reaction to reading all of the political news from home .