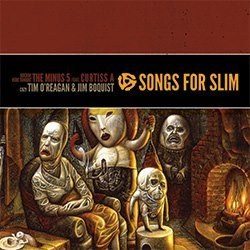 On February 19, 2012, former Replacements guitarist Slim Dunlap was hospitalized due to a massive right brain stroke. The general prognosis for Slim is that he will likely need around-the-clock care for the rest of his life. Since long term care is extremely expensive and not covered by regular insurance, the challenges facing Slim and his family are significant.

Songs For Slim was devised to raise money for Slim by auctioning off records featuring various artists covering Slim’s songs. These records are being released as a limited edition series of split 7″ vinyl 45s in beautiful, numbered picture sleeves with artwork by original Replacements drummer Chris Mars, now an accomplished visual artist. All of the proceeds from these efforts will go to assist Slim and his family.

So far, 3 auctions have been completed. The series kicked off with a deluxe 5 song 10-inch EP package by The Replacments, their first release of new material in over 20 years. 250 copies were auctioned off and a staggering $106,000 was raised (with copy #1 going for $10,000). The next two releases were singles featuring Lucinda Williams/Tommy Keene and Steve Earle/Craig Finn & Friends. Over $15,000 was raised through these two auctions. For those who aren’t able to win an auction, all Songs For Slim releases are also available digitally worldwide and a 12-inch vinyl version of The Replacements EP will be available on April 16. Future compilations of Songs For Slim recordings are being discussed for possible fall 2013 release.

Visit the Songs For Slim Facebook page for more information.

The 4th Songs For Slim release is a special offering for Record Store Day 2013. On April 20, a limited-edition 7-inch split single will be released featuring Minnesota legend Curtiss A (aka the “Dean of Scream”) and The Minus 5 (featuring Scott McCaughey, Peter Buck, and John Moen & Nate Query from the Decemberists) working some transcontinental magic on one of Slim’s greatest studio achievements, “Rockin’ Here Tonight.” The sessions for this amazing performance began in Portland, Oregon under the tutelage of Adam Selzer and Scott McCaughey and was completed in Minneapolis with Ed Ackerson at Flowers Studio (where The Replacements recorded their Songs For Slim EP). On the flip are local heroes Tim O’Reagan (Jayhawks, Joe Henry) and Jim Boquist (Son Volt, Golden Smog) (ably assisted by Paul Westerberg on guitar) shining their considerable talents on Slim’s “Cozy,” a “shoulda been” hit if there ever was one. This single will be limited to 1000 copies. While all SFS releases are normally available through auctions, this special RSD release will be available via participating retail outlets (check the RSD website for more details). Because of a ninety day exclusivity agreement with the RSD folks, the digital release for this single will be July 23.