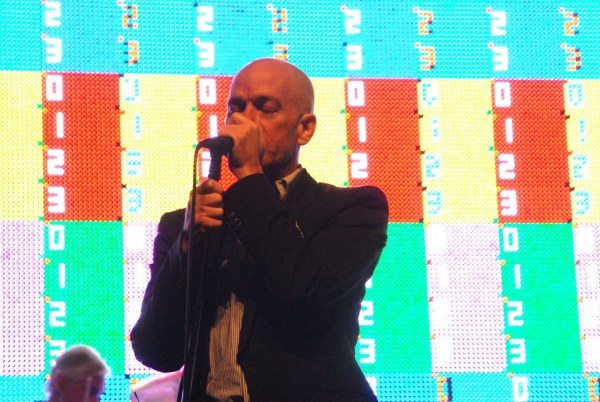 After scintillating shows in Dallas and New Orleans over the weekend, R.E.M. now heads to South America to prep for Wednesday night’s maiden concert in Bogota, Colombia, at Parque Simon Bolivar. The Colombia show kicks off R.E.M.’s highly-anticipated return to South America, where the guys last played seven years ago in Rio and Buenos Aires. This time, the band will play ten shows over the course of seventeen days in six different countries, four of which–Chile, Colombia, Peru, and Venezuela–they’ve never previously played. It should be an amazing two weeks coming on the heels of what Bertis calls “a great set and quite a performance inspired by a great crowd” in New Orleans at the Voodoo Festival. At various stages, the band will have some fantastic support along on the South American tour: Travis, Kaiser Chiefs, Mars Volta, Bloc Party, Jesus and Mary Chain, Fernando MagalhÃ£es, Wilson Sideral, Sonic, Cemeterio Club, Los Turbopotamos, Los Paranoias, Nenhum de NÃ³s, and The Mills. Click HERE for full details of the tour including ticket information, and click on the links below for some of the press and interviews (in Portugese and Spanish) Michael and Mike did last week in preparation for the tour.