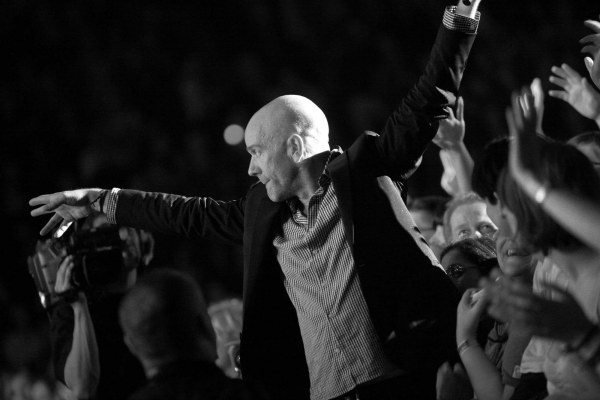 R.E.M.’s world tour resumes tonight at the Nokia Theatre in Dallas, Texas (check out this cool timeline of R.E.M.’s past history in Dallas). The band has been on a brief break since the conclusion of their European Tour in Athens, Greece on October 5th. Tonight, the band will be supported by the Old 97’s. Fans in attendance, can upload photos, videos, and tweets at the tour site.

On Sunday, R.E.M. headlines the New Orleans Voodoo Festival, and we are very excited to announce that the performance will be webcast live. Be sure to visit the Voodoo Festival’s website for more information on how to tune in.

After the Voodoo Festival performance on Sunday, R.E.M. travels to South America where they will kick off a two-week tour in Bogota, Colombia, on October 29th. The band will play a total of ten shows in South America including stops in Peru, Chile, Brazil, Argentina, and Venezuela. Click here for full details of the South American tour including support just added.

“UNTIL THE DAY IS DONE” VIDEO PREMIERE

The new video for “Until the Day is Done,” the fourth single from R.E.M.’s acclaimed record ACCELERATE, had its world premiere yesterday at Spinner.com. Fans who attended the Working Rehearsals in Dublin, Ireland, in the summer of 2007 will recognize much of the footage, which was shot by Vincent Moon at the Olympia Theatre, as well as on location in the band’s hometown of Athens, Georgia. You can click HERE to watch the video at Spinner.

“Together with a diverse group of Honorary Committee artists, we celebrate and support the Foundation’s mission of using the power of music to promote cross-cultural understanding and remind people of all cultures and religions that we share a common humanity.”