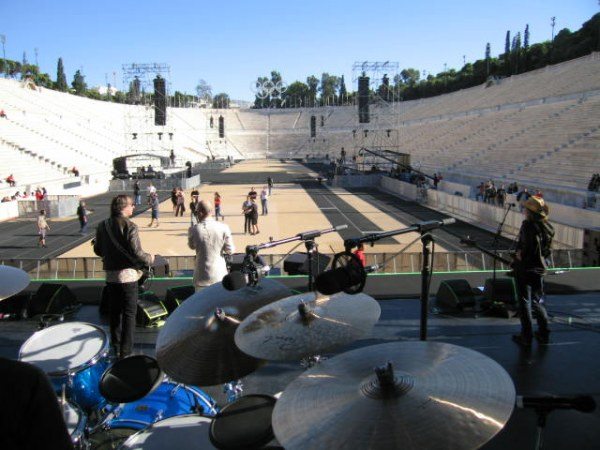 We all fly back to the USA today after a stupendous, tour-ending, one-of-a-kind FREE concert in Athens, Greece, at the original Olympic Stadium, Kallimarmaron Panathinaiko (the “beautifully marbled”), last night. It’s truly hard to think of another setting which tops this one…the only stadium in the world built out of white marble, an absolutely amazing venue, with the awe-inspiring Parthenon dominating atop the perch on the Acropolis in the distance, just over Mike Mills’ shoulder from the stage. It’s an understatement (of sorts) to say that we felt inspired by and in awe of our surroundings in the “other Athens.”

The MTV GR Concert was a fantastic way to bring the European leg of the tour in support of ACCELERATE to a close. Great openers in the Kaiser Chiefs, C:Real, and Gabriella Cilmi, and one of the best crowds of the tour–50,000 strong–who, no doubt, appreciated the gesture by MTV Greece and the bands involved in putting on the show. To quote a line from a popular song played nightly on the tour…”WOW.”

Now it’s a few days off before we head to Dallas for a show on the 24th, followed by the Voodoo Festival, and then a string of shows in South America, and the tour finale in Mexico City. It’s been a great year…hang tight–the best is yet to come!