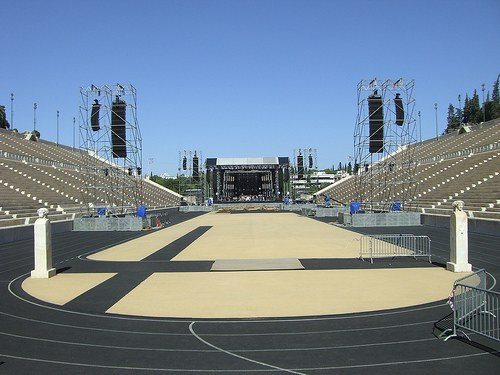 We had a couple of days in Istanbul, and since we had never been there, everyone enjoyed seeing the sights, discovering the blends of cultures, in this sprawling, bustling city. And the show was on a spectacular site, hard on the bank of the Bosphorus, with illuminated mosques dotting the hillside in Asia across the way. Real strong show with a young and boisterous crowd. And being on the water imparted a balmy breeze to the proceedingsâall in all, a joyous first visit to Istanbul, a city always hoped for and finally achieved in R.E.M touring dreams.

After the show, it was on to Athens, for no real time in the city since we had a show less than 24 hours after leaving the stage in Istanbul. But what a show it was: Lights, camera, action âthe launch of MTV Greece, live broadcast throughout Southern Europe–coming soon to an MTV or VH1 channel near youâ¦(check local listings). R.E.M. played a spirited set for a huge audience in one of the storied venues in the world. The site of Kallimarmaron Panathinaiko Stadium, incredibly, dates back to 566 B.C., where the original stadium was built from wood and was used, in the Classical era, to host the athletic portion of the Panathenaic games in honor of the goddess Athena; in 326 B.C., the stadium was rebuilt from marble and enlarged to accommodate around 50,000 spectators. Centuries later, in 1870, the ruins were discovered and renovated. The 1896 Summer Olympics–the “modern” Olympics–were hosted in the stadium. It has a similar aura and feeling as the Arena in Verona, only a massive version–seating more than 50,000 people in the worldâs largest marble structure. It was our second time in Athens, and the stadium, crowd, MTV celebration– all these moving parts came together optimally after many months of planning and hoping. We were grateful and very happy to end our 50 show European Tour with such a fun and festive night.

Now to a break, now to some rest and regrouping–then to the Americas, North, South and Central (see the Live page for details) with our next âfinal showâ being Mexico City November 18th. Come on down!