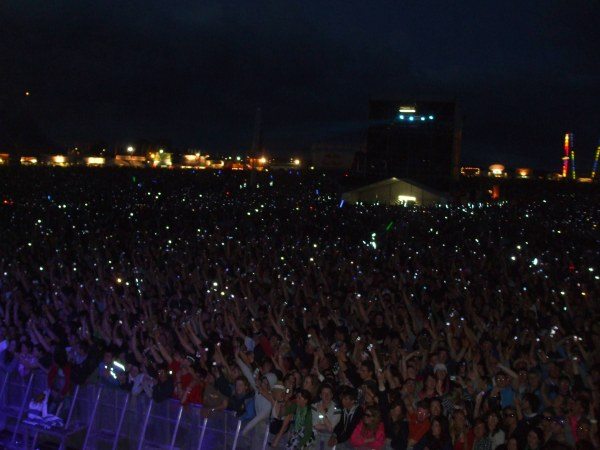 Highlights of the summer–for me at least

1. Dublin â as usual, a tremendous reaction in R.E.M.âs favorite home away from home even in a new setting: OXEGEN – one of the best festivals we’ve ever played.

2. Berlin â aftershow dinner with Jacknife Lee and three of his favorite bands: Editors, Snow Patrol , and of course, R.E.M. (It was even worth the one-hour-of -sleep-night that followed before our early flight).

3. Luxembourg âgetting the guitar back. Hallelujah. We got lucky. Enough said.

4. Athens, Greece â MTV Greece–You just had to be there. Thankfully a lot of people were there and got to share the magnificent coalescence of music history, setting, spectacle. Thanks MTV Greece–you are off to a great start, and we enjoyed being a part of it.

5. Istanbul â Just like I had imagined, nothing like I had imagined, like nowhere Iâd ever been. We took the boat across the Bosphorus for dinner in Asia. That was different. Then stayed up with everybody to watch the Vice Presidential debate. Golly, it was like, Main Streetâ¦or somethinâ.

6. Locarno â A little part of Switzerland and a whole lot of Italy â one of the few return venues we had on our list. And it still is.

7. Bilbao â finally getting to that corner of Spain, having a night off to explore and take it all in, then a wild festival on a rainy night on top of a hill overlooking the city. We love Spain.

8. Dresden– another return to a favorite venue on the banks of the Elbe. You canât top the view of the old and newly-rebuilt cultural capital of Germany. And the promotion put on by the Art Museum for our fans was an innovative and generous marketing idea and we were happy to be a part of it.

9. Verona â just walking into that glorious arena sent this palpable wave of history or force or emotion through you. Then the show got better from there. This and Milan are among R.E.M.âs best in Italy ever. And the amazing Friulian lunch friends threw for us the afternoon of the Udine show was definitely the best ever. Italy loves R.E.M.; it is mutual.

10. Madridâ a rare two days off in the grand old city gave us some time to actually see a lot of the city this time, enjoy some fine food and then, R.E.M.âs show in Las Ventas , the Yankee Stadium of bullrings, was to me, one of the handful of finest shows on the tour. Definitely one of the best audiences on the tour, but that has been the norm in Spain, and especially Madrid. Before the show, I met Americans, Italiansâ¦people from all over; fun to have fans planning trips to such a wonderful city and then be rewarded by such a special time.

Like an R.E.M. set list, I could come up with an equal number of additional highlights of our time here the past three months but Iâll stop with those ten. Itâs hard to remember every moment, but this tour has been full of many treasures. But now, a break.