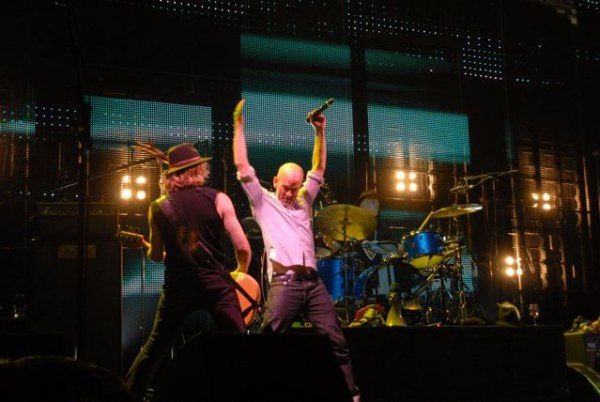 While the band is on a short break from touring before they return to the stage in Dallas on October 24th, we wanted to keep you up to speed on some of the other things that are going on in and around the R.E.M. camp, news wise, etc. Here’s this weekend’s roundup:

Check out this really cool GEAR BLOG, featuring photos of the band’s setup and commentary from the good people at Austin City Limits.

MICHAEL FIGHTS WITH A ZOMBIE?

According to this website, Michael and a nun will team up to do battle against zombies in an upcoming book of zombie fiction titled “World War Z”! Maybe it’s got something to do with this great cover the band did of Roky Erikson’s classic “I Walked with a Zombie” back in the day:

MICHAEL’S IPOD TO BE AUCTIONED AT NOVEMBER WITNESS EVENT

Join Peter Gabriel and his human rights group WITNESS on Thursday, November 20, 2008 in New York City at their annual benefit dinner and concert, Focus for Change. This year, the event will focus on WITNESSâ campaign using video and online technologies to eradicate slave labor in Brazil. There will be an auction at the event on November 20th which will include an iPod with a playlist by Michael. Stay tuned for details here at remhq.com and for more information in the meantime, please visit Witness.org.

MTV Greece will rebroadcast the band’s Athens concert from October 5th on Sunday, October 12th at 4PM and Friday, October 17th at 9PM. If you live in the area, be sure to put it on your calendar and check it out.

MICHAEL’S PLAYLIST AT MYSPACE.COM NEXT WEEK

Michael will have a Playlist featured at myspace.com on October 17th so be sure to visit the social networking site next Friday for details.