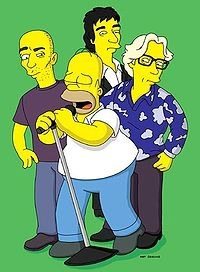 As the band and office prepare to break for a few days for the Thanksgiving holiday, here’s a quick roundup of some of the things going on in and around camp R.E.M.:

The band spent the past three weeks at the Music Shed in New Orleans working on songs for their next record with Jacknife Lee. Michael provided glimpses of the new material in a handful of movies he shot with his iPhone. Check all five of them out at the REMHQ YouTube Channel, and expect more studio news and action from the band at some point in the new year when they will resume working on the new album.

2) Vincent Moon Wins Award: Congratulations to our friend Vincent Moon who recently won the highly-coveted Sound and Vision Award. Vincent’s concert-documentary, This Is Not A Show, has screenings upcoming in both Baltimore and Woodstock, NY, on December 5th.

3) Speaking of Thanksgiving: It was 8 years ago (November 18, 2001) that R.E.M. made a guest appearance on The Simpsons, playing “It’s the End of the World As We Know It (And I Feel Fine)” at a “rainforest benefit” at Homer’s garage bar/hunting club. Watch the episode here…

4) Georgia Theatre Donations Fund: As we mentioned a couple of weeks ago, Mike recently played at a benefit concert for the Georgia Theatre, which suffered extensive structural damage due to an electrical fire in late June. The Georgia Trust for Historic Preservation has set up a Rehabilitation Fund if you are interested in helping rebuild.

p.s. Avclub.com has an interesting article on one of the classic R.E.M. songs not among the thirty-nine on Live At The Olympia, “Talk About the Passion.”

p.p.s. people often wonder what it’s like living in such a “red” state like Georgia. What they probably don’t know is that we in Athens (and thanks to the WWW– everywhere) get to read the weekly commentary of estimable newspaper publisher Pete McCommons–here’s a sample of his latest, from this week’s Flagpole, his take on the state of our state…

p.p.p.s. Some reasons to be thankful from friends of ours in New Orleans