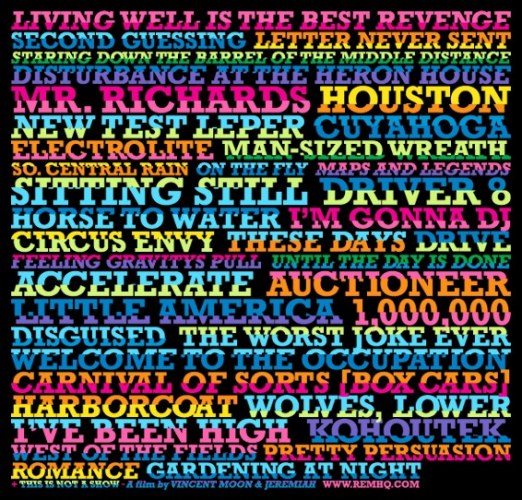 This Is Not A Show, the concert documentary which chronicles R.E.M.’s five-night stand in Dublin, Ireland, in the summer of 2007, is now showing in select theaters in the USA and Europe this month and next. The hour-long film, directed by Vincent Moon and Jeremiah, recently had its world premiere screening at Sound Unseen Festival in Minneapolis in September and also premiered in Europe this past weekend at the Darklight Festival in Dublin. Congratulations to both festivals which celebrated their 10th anniversaries. Bertis attended the world premiere at Sound Unseen and reported back, “No question, this is the best live film on the band yet.” He also quipped that the film is “a lot better on the big screen in its full glory than it is on the computer . . .” So see it theatrically while you can! Here is a list of screenings so far for This Is Not A Show. Please visit cinemapurgatorio.com for the latest schedule:

In Athens, Georgia, Listening Party for Live At The Olympia at Hotel Indigo, October 26