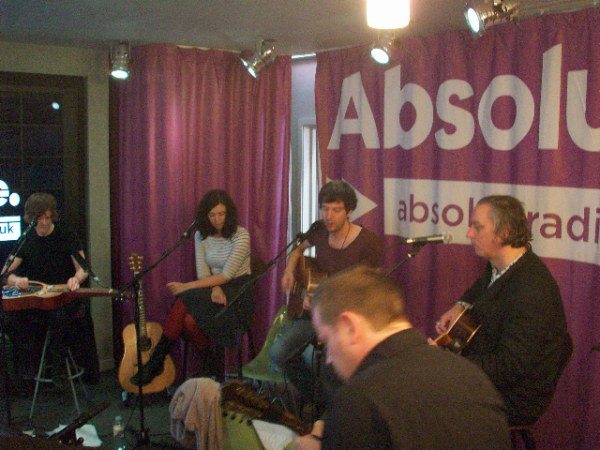 Lots of Tired Pony happenings this week with the release of their debut album The Place We Ran From on Monday, a highly-anticipated sold-out performance tonight at the Forum in London, press rounds with radio and TV appearances all week, and a new single, Dead American Writers all coalescing to create quite a stir throughout the U.K.

R.E.M.’s equipment manager/guitar tech/workhorse extraordinaire DeWitt Burton has been on hand for the Tired Pony traveling show and, in the midst of all the moving parts and responsibilities, has somehow managed to squeeze in time to take a few photos from London. DeWitt reports, “Huge buzz in London about this show tonight … At Absolute Radio now for televised performance. Then a soundcheck at the Forum. Then another radio show: ‘Simon Mayo and the Great British Songbook’ and then a show.” Check out DeWitt’s photos below.

Tune into Tired Pony’s in-studio performance on Simon Mayo’s Drivetime between 5PM-7PM UK Time HERE. The band will be in the Great British Songbook Library to perform their single ‘Dead American Writers’ and a cover of The Kinks’ classic ‘Tired Of Waiting’.

UPDATE: The band performed a cover of Van Morrison’s “Into the Mystic” on Simon Mayo’s show yesterday. If you live in the UK, you can watch it here. This video will be available to watch until 2359 on Wednesday 21 July, in the UK only.

Also, if you haven’t watched the interview Gary Lightbody and Peter did on BBC Breakfast earlier this week, here’s the link. Visit Tired Pony.com and their You Tube page for more great music and details.

Read these reviews of The Place We Ran From:

We’ll post links to the radio shows if and when they’re available and will follow through with some more photos from tonight’s show, so stay tuned.