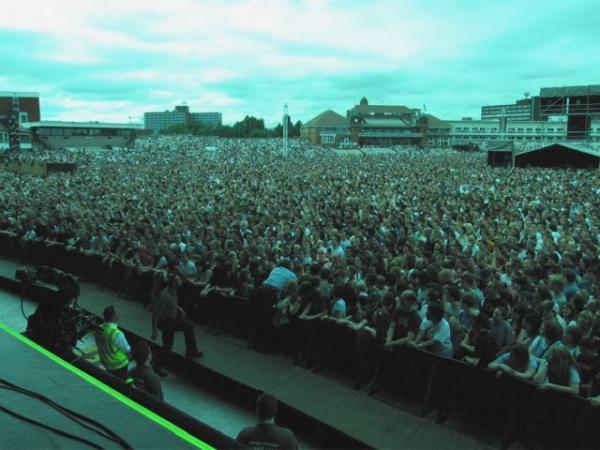 The summer tour continues to gain momentum this weekend moving through Manchester tonight (see setlist below), Loch Lomond Saturday, and Dublin on Sunday. Earlier this week, the band returned to Sheffield and Glasgow for makeup gigs at Hallam Arena and Glasgow Green, underneath the biggest outdoor big-top tent on the continent (read the Postcard from Sheffield). Itâs definitely been quite a week with great shows all around, mainly good weather, and just as much excitement in store next week with concerts in Sweden, Norway, Denmark, and Holland.

SUPPORT
As has been the case throughout the summer tour, R.E.M. has been receiving outstanding support, this time around from some of Britainâs finest: Idlewild, the Zutons, Feeder, & Richard Hawley. NYC’s Ambulance Ltd. will be added to the bill in Loch Lomond and Mew will take over next week in Scandinavia.

DUBLIN BROADCAST
Speaking of Dublin, the Ardgillan Castle concert on Sunday will be broadcast by RTEâs 2FM Live Radio throughout Ireland as well as in Northern Ireland. As we mentioned on REMHQ.com a few days ago, the band will dedicate a song to Aung San Suu Kyi, the Burmese Nobel Peace Prize recipient who has been held under house arrest in her country by the brutal military junta. The dedication will be broadcast via satellite television inside the Southeast Asian country and will be the first time the Burmese people will be able to watch part of an international music concert in which musicians speak about Aung San Suu Kyi.

Click on the link below for more details about the concert and its broadcast:

RETURN OF THE TAXI
Finally, if youâre in London, keep your eyes peeled for the return of the R.E.M. taxi! Itâs a reprise of the orange taxi from the Monster tour and you can even request it next time you need a lift somewhere.

MANCHESTER SET
(Editor’s note: described by Bertis & others as a “vibrant show with an exuberant crowd”)