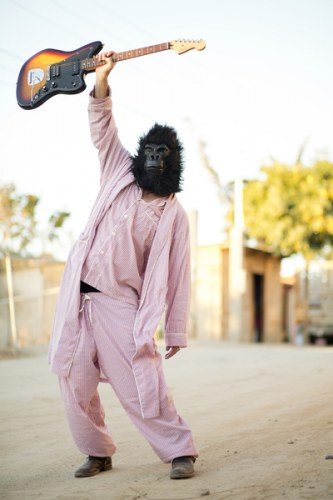 Hey this is Peter,

I just wanted to keep you all up on what is going on with my fantabulous career. I have a new single coming out in the next two weeks on Mississippi Records. It’s a monkey concept single. There will be about a 1000 available and can be ordered from your regular indie record stores.

I would like to apologize for the current unavailability of my solo record. My assumption was that a record from a non-singing, non-lyricist member of REM, released only on vinyl, would sell some where in the region of about 800 records, leaving me with 1200 of the things in my basement. It was extremely gratifying to find them sold out immediately. Unfortunately, I only cleared the samples for LVMF for 2000 copies. It has taken me awhile to get the the record re-pressed without that track. It should be available in the next couple of weeks. This being indie world, all dates are approximate, but again it can be ordered through your local independent music store or you may contact Mississippi Records in Portland. LVMF will not be on the re-pressed version, but it is on you-tube and is relatively inconsequential anyway.

I will be touring Spain and Norway this summer with my solo band and Robyn and hope to see you all there.

Summer’s here and the time is right.