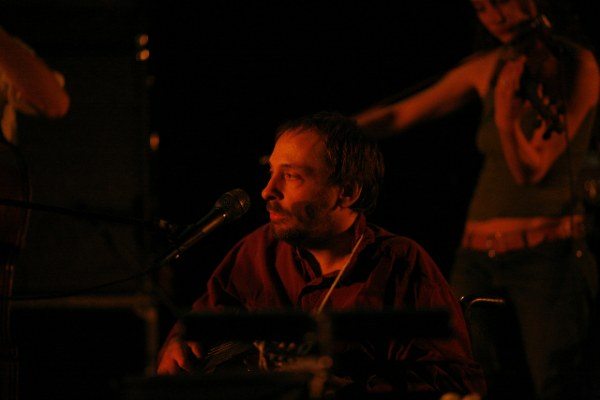 “We have lost one of our great ones.”

Surrounded by family and friends, Vic Chesnutt died in Athens Georgia this afternoon, Friday 25 December at 14:59.

In the few short years that we knew him personally, Vic transformed our sense of what true character, grace and determination are all about. Our grief is inexpressible and Vic’s absence unfathomable.

We will make more information available according to the wishes of Vic’s family and friends.

“I flew around a little room once.” A line from Supernatural.

He was just that. He possessed an unearthly energy and

yet was humanistic with the common man in mind. He was

entirely present and entirely somewhere else. A mystical

somewhere else. A child and an old guy as he called himself.

Before he made an album he said he was a bum. Now he

is in flight bumming round beyond the little room. With his

“in 1991 i moved to athens georgia in search of god, but what I discovered instead was vic chesnutt. hearing his music completely transformed the way i thought about writing songs, and i will forever be in his debt.”

The most important story to report now is not Vic’s death but a life and work overflowing with insight, humor, and yes, resilience. This, after all, was the man who wrote: “I thought I had a calling, anyway, I just kept dialing.” Sixteen extraordinary albums, five in the last couple of years; countless live shows so powerful and sublime they deeply altered the lives of those on the stage with Vic and those looking up, yes up, at him. The second most important story here has to do with a broken health care system depriving so many of the help they need to stay around and stay sane, and a society that never balks at providing more money for more wars but fights tooth and nail against decent care for its citizens. Vic’s death, just so you all know, did not come at the end of some clichÃÂ© downward spiral. He was battling deep depression but also at the peak of his powers, and with the help of friends and family he was in the middle of a desperate search for help. The system failed to provide it. I miss him terribly.

Years ago upon discovery, West of Rome consoled me when I was going under. A life saver with the straight story. I followed since then from a distance. Vic was a unique being, mind, voice. No one spoke or made music like that, with that particular timbre, vocabulary and perception. Fierce and direct or levitated, whimsical and ornamental, he always cut to the bone. And past that, to the soul. Its a shame. A national tragedy, when you look at the issues being faced.